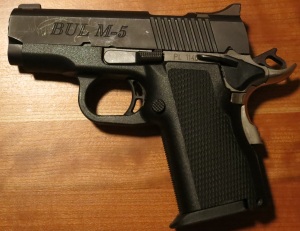 One of my “grail guns” has always been the BUL M-5 Ultra-X, dating from my first year of getting into firearms. I’ve always loved its combination of compactness and firepower. For a long time, I had been holding out hope of getting one in 9mm, but it became clear through my research that if any Ultra-Xs in 9mm were ever imported, it was probably vanishingly few. I settled on a Charles Daly .45ACP model that a reader offered at a good price.

My thoughts? Read on!

I chose a Charles Daly (versus the much-more common Kimber Ten II Ultra) because the Charles Daly has the BUL M-5 markings still on the slide and frame.

First and foremost: the trigger guard is round on the second-gen guns, versus being square on the first-gen guns. No real difference, it just makes it easier to determine relative age.

Second… the second-gen guns usually have a bull barrel setup without an exterior bushing. This isn’t a universal rule – I’ve seen pictures of some that did have a “normal” bushing setup – but it seems like most of them are bull barrels. These use a dual spring system that looks a lot like the Para “retro” system.

Third, the second-gen guns have a grip safety with a memory/speed bump, which the first-gen guns lack. If you’re one of the cool kids who likes to use a high grip on their 1911 (and the Ultra-X kinda forces you down that route due to its size), this is nice to have.

Field stripping these second-gen guns seems rather easier than the first-gen guns. No need for a paper clip – just pop the slide safety, pull the slide, remove the recoil assembly, and pull the barrel forward. You need to be a little more careful on reassembly, as a couple of the pieces of the recoil assembly need to be oriented towards the barrel, but it’s not a problem if you keep your wits about you.

Trigger pull is good. No wiggle, and is actually on the light side for a carry gun – to the extent that I was consistently surprised on the first shot of a magazine.  It wouldn’t be my choice for a match gun, but that’s not what this gun is designed to be. The safety is less impressive – its geometry seems to require a very firm push to enable it. I didn’t experience this on my first-gen gun, albeit that one has an ambidextrous safety. On the range, I didn’t really notice this flaw, so your mileage may vary. 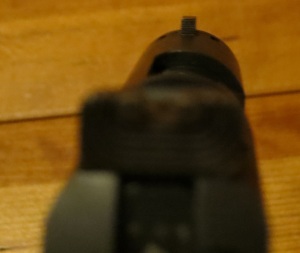 The sights are plain notch and post setup. They work, but I’d replace them with some Kimber-cut Meprolight night sights if I thought I was going to use it as a carry gun. There is an odd lightening cut just forward of the rear sight. It doesn’t help or hurt, but it’s worth noting.

Now… magazines. Unlike with the 9mm BUL M-5 guns, you can readily get access to the appropriate magazines with the .45ACP models. Mec-Gar makes the appropriate 14rd mags (which stick out of the grip), and you can use Bul Impact / Charles Daly DDA magazines (readily available) if you want flush fit. The DDA magazines have a different follower, but it’s compatible with the Ultra-X.

On the range, the Ultra-X performs like any other .45ACP compact pistol, which is to say it generates a fair amount of recoil. This is heightened somewhat by the small size and weight of the gun, but not offensively so.  Mags dropped free when released. I used Magtech .45ACP 230gr RN FMJ ammo for testing. I also fed a few Gold Dots through, and they had no functionality issues.

On the whole, it’s an impressive pistol, with more firepower and reliability than you’d expect from something of its size… I kept waiting for the magazine to go empty as I rapid-fired it, and was surprised when the slide seemingly took forever to lock back. It wouldn’t be my choice of a range gun, but I can see how it would be appealing as a carry gun.