After doing my annual review of my gear and holster box a few weeks ago to see what I should probably sell to other people, I noticed that I had a couple HSGI Tacos that were still plenty usable, and in fact, would be quite helpful for the Green Ops AK class (since I have no kydex AK pouches). Unfortunately, these were PALS attach items, and I don’t really use MOLLE battle belts… I’m a competition double belt guy for the most part. (Note: PALS is often referred to as “MOLLE”, but this is not technically correct.)

Enter the First Spear Missing Link. The Missing Link is basically a connector that works with MALICE, WTFix, or similar clips that provides a belt interface. They come in packs of six for $25 (I bought mine from SKD Tac). It is stupidly simple, and has some pluses and minuses as a result of that.

The Missing Link interfaces with PALS by essentially riding the clip and using the sewn in bits of the strips to provide a stopping point for the Missing Link loops. There is also a hook interface on the back (part of the “hook-and-loop” system, also known as “Velcro”) that you can use to attach to a loop interface on your belt. First Spear’s video on the Missing Link shows them putting it on a different way than I do, because that’s how their belt’s loop interface is positioned. On a competition double belt, you want the hooks on the outside. It took me a bit to figure this out, but it works quite well.

Installation is easy enough, and can be demonstrated in pictures, or in that video shown above.

Now, review time… there were things I liked about the Missing Link, and things I didn’t love.

On the upside… the interface is pretty secure, or at least as secure as your clip and belt are, especially when using the hook interface. The installation of the Missing Link is also fast and easy, or at least as fast and easy as threading the PALS is. They’re also not all that expensive.

There are downsides, though. There is a tiny bit of movement since the Missing Link isn’t all that tight. Not a big deal for mag pouches, but some people like their gear to never move at all on their belt. It’s also not really perfect for double belts because there’s nothing to secure placement on the outer belt. It won’t fall off, but it will move around until you place the outer belt on your inner belt securely. The biggest problem, though, is that they’re just a little too loose for a double rifle mag pouch, and they hang out at a pretty bad angle out to the side. Single mag pouches are great, I’ll probably try a different solution for the double pouches.

In any event, if you’ve got a single mag PALS pouches that need a belt attachment, this seems like a pretty good option that won’t break the bank.

Ever since I started coaching a youth shooting sports team, the medical aspect of shooting has loomed a little larger in my consciousness. While we run very safe practices, life comes at you fast, and you need to be prepared for the worst eventualities. It was serendipity, or at least a nice coincidence, when I saw that TOC was offering a class that combined active threat management, Stop the Bleed, and some shooting. When another class with them got canceled, I applied the payment to their Active Threat Response class.

What did I think? Read on!

END_OF_DOCUMENT_TOKEN_TO_BE_REPLACED

The first really expensive guns I ever bought was a Galil SAR SBR that was built by the fine gentlemen “TennGalil” over at Hillbilly Firearms . The full build cost me about $2000, which, in retrospect, I suppose doesn’t sound like a lot compared to what higher-end AKs cost now.

Despite it being a rather amazing piece of kit, I barely ever shoot it anymore. There’s not a lot of room in the competition world for an iron-sighted AK if you care about really competitive. Thus, I was quite enthused about Green Ops offering their newer Defensive Kalasknikov class You can read on for my impressions.

END_OF_DOCUMENT_TOKEN_TO_BE_REPLACED

I make no secret that I like to train with a diverse variety of instructors. I think this makes you a better shooter, and it also gives you a lot more perspective on what you see in classes. In this case, Green Ops was hosting Sentinel Concepts for a shotgun class. Sentinel Concepts is a one-man show run by Steve Fisher, who’s one of the biggest names in the tactical shooting community. Needless to say, I was excited by the opportunity to train with him, and signed up months in advance.

Was it worth it? Read on!

END_OF_DOCUMENT_TOKEN_TO_BE_REPLACED

I always enjoy training with new instructors. Everyone’s got a different take on subject matter, and even small tweaks to technique can lead to big gains over time. Thus, when I saw that SpartanCore was offering a new vehicle tactics class (“Charon”), I was excited not only to get in some training in and around vehicles, but to also learn more about SpartanCore and the people involved.

END_OF_DOCUMENT_TOKEN_TO_BE_REPLACED

After training with TOC last year in a really well-thought-out carbine class, I had made it a priority this year to try to take another class with them. Thankfully, they scheduled their “Vehicle Ambush Tactics – Pistol” class on a day I could take it, so I signed up ASAP.

I’ve never done any shooting in or around vehicles, so I had almost no expectations walking in. I just wanted to learn some new skills, do a little shooting under stress, and maybe have a bit of fun. I think I accomplished all those goals. Read on for more.

END_OF_DOCUMENT_TOKEN_TO_BE_REPLACED

The combined threats of the pandemic and ammo shortage have been causing me to be a little more selective than usual about my training selections in 2021 so far. But when I saw that Green Ops was introducing a red dot pistol skills class, I was intrigued and knew I’d be taking it. I am 100% sold on the benefits of red dot pistols, and was curious as to how Green Ops would approach that subject matter. Read on for what I thought!

END_OF_DOCUMENT_TOKEN_TO_BE_REPLACED

It’s December, and that typically means I’m trying to get in that last class or two to finish up my training year. I had been debating whether to take the Green Ops Defensive Pistol Clinic I. On one hand, it’s a great class, but on the other hand, I’ve come pretty far with my pistol shooting and I wasn’t sure it was going to be as relevant to me.

I decided that one way to make it relevant was by using a gun I was not at all familiar with: the Silencerco Maxim 9. The Maxim 9 is an integrally suppressed, roller-delayed 9mm pistol, and I wanted to see if it was really up for some harder use… or if it was just a range toy. Read on for my impressions of both the class and the gun.

END_OF_DOCUMENT_TOKEN_TO_BE_REPLACED

(lead photo credit: David Simerly of DNA Guns took this shot, and it’s awesome, like every other photo he takes)

One thing you never have seen on this blog previously is a review of a two day class. Two day classes are almost universally held on Saturdays and Sundays, and given my Sabbath observance, I can pretty much never attend.

But as bad as 2020 has been, I did get one very special treat: a two-day Modern Samurai Project class held on Tuesday and Wednesday. I immediately jumped on it, and told my employer I’d be on PTO (and don’t bother me!). Read on for my impressions of the class.

END_OF_DOCUMENT_TOKEN_TO_BE_REPLACED 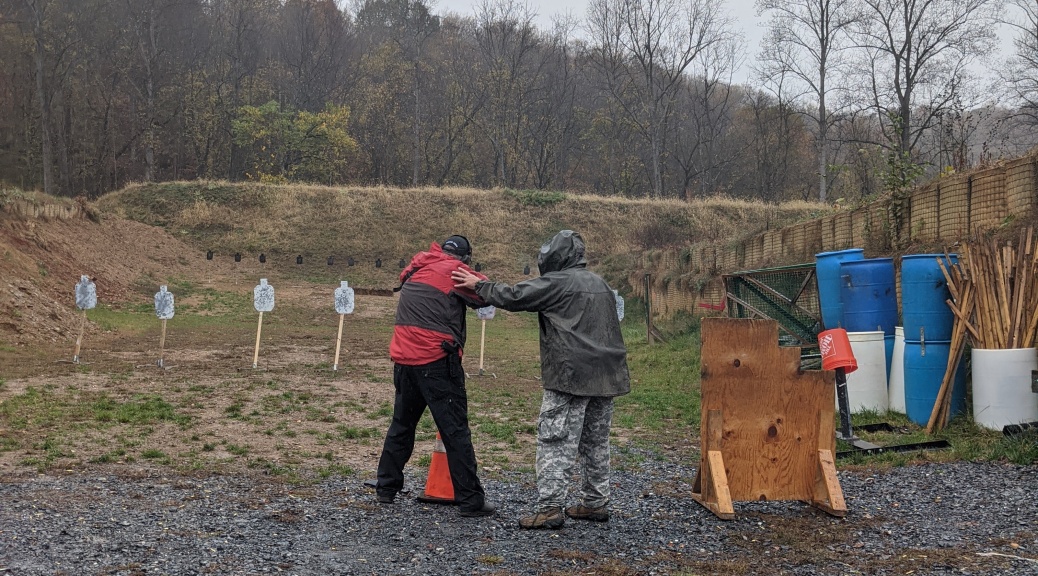 When Givati Rifle and Pistol Club announced that they were going to sponsor another class delivered by Paul Casale of Arlington Rifle and Pistol Club, I was quick to get in on it. A hundred bucks for five hours of advanced rifle/pistol training? That’s a steal. I had a great time at the last class, and I was expecting even better things out of this one.

Read on for my impressions after the break.