I have a love-hate relationship with vertical foregrips (VFGs). On one hand, they are a life-saver when you don’t have much handguard to hold. On the other hand…pretty much everything else. They add weight, they promote a grip not conducive to accuracy, they make it hard to shoot from the bench, and they are another point of potential failure. LuckyGunner has an old-but-still-excellent article about the correct usage of VFGs, and I encourage everyone to give it a skim. I run VFGs on a couple of my rifles, but am rather picky about what they go on.

That said, I had been wanting to experiment with a folding VFG on my 22lr AR-15 SBR to see if it made it easier to shoot from the bench. Since this is an Israeli weapons blog, I decided to give the FAB Defense T-FL a try… more after the break.

My T-FL came in a FAB Defense-marked bag, but no other labels were on it. I bought it from an eBay seller, so G-d only knows the provenance of this accessory.  On the plus side, I love the zip-loc bag… no cutting myself to get it out of a clamshell.

The rail retention mechanism is just a simple screw, which works well enough. There’s another screw that you can use to tension the VFG in general, but I didn’t find I had to mess with it.

You can see the locking mechanism for holding the VFG in a locked position is a strong-looking spoke design, which gets pushed out when you push the button on the other side of the VFG (see the picture at the top of the article). This feels like overkill to me, but I guess it’s built like it’s going into combat (which is reassuring). The hex nut provides the various locking positions.

There is a coarsely-threaded storage cap that provides some interior storage room to the VFG. Good for batteries, perhaps, but I don’t know that I’d want more hanging off the front of my rifle.

Here’s a size comparison with my rifle’s existing Magpul RVG. The T-FL is not too much bigger. An internally-threaded cap design could have kept the T-FL to roughly the same size, albeit opening the cap would be more time-consuming (with coarse threads, it’s a really quick twist, which I like). 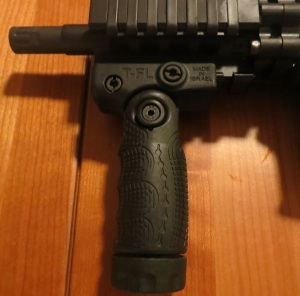 Here is the T-FL mounted up on the rifle. You have to give the button a pretty good push to unlock the VFG for repositioning, but I consider this to be acceptable – the last thing you want to do is unlock it by accident. It reminds me a bit of the unlocking complexity on the KPOS G2 chassis’ VFG – perhaps the lack of smoothness has to do with polymer construction. I found that holding the VFG was comfortable, but I was not a huge fan of the way it promotes beer can gripping with the finger grooves. 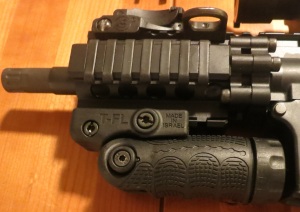 Here’s the VFG folded up. As you can see, it clears the magwell on my Daniel Defense pistol-length rail, but just barely. This provides a reasonably effective platform for bench-rest shooting, which is handy for zeroing in a rifle. You can’t fold it flat the other way, which is disappointing, but probably a good thing for safety reasons.

On the whole, I like and recommend the FAB Defense T-FL if you absolutely need a VFG on your rifle. It was pretty cheap at $33 shipped. It’s not too big, it’s not too heavy, it feels solid, and it provides the bench-rest capability I was looking for. I would have been happier if the folding mechanism was a little smoother, and if it would have lost the finger swells.

There’s also a quick-release version of this VFG for like $20 more. IMHO, if I’m going quick release, I don’t know why I need to fold anymore.  But if quick release is important to you, that’s an option as well.