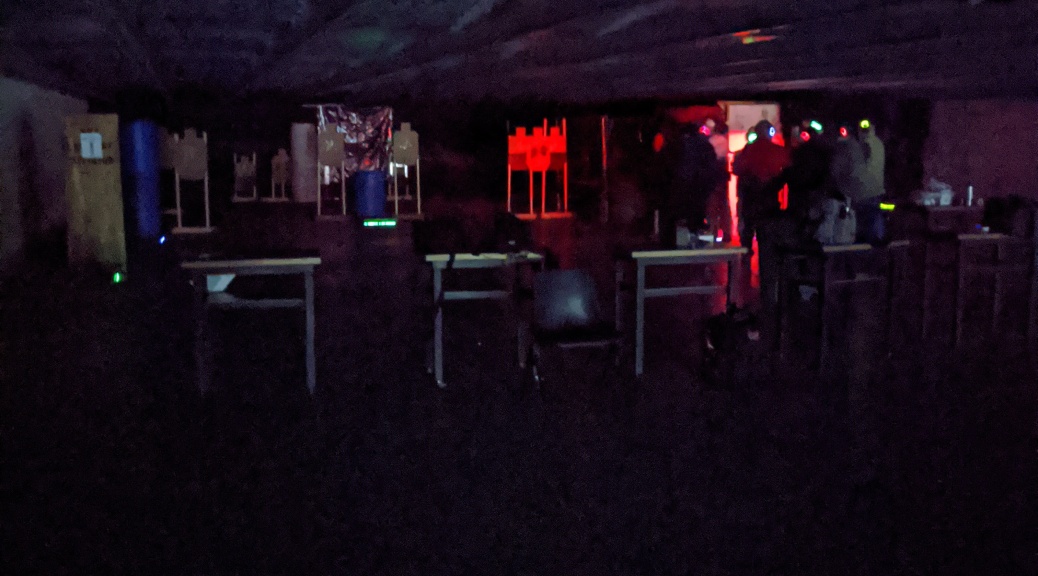 A spot opened up in the IDPA low light match on Tuesday, and I decided I’d take it (after begging the wife for permission). I’m kinda moving away from IDPA, but a chance to shoot in the dark is an opportunity worth taking.

Given my relative success with shooting CO last match, I decided I’d go optics again, this time with a G17 topped with a Fastfire 3, but in the “WML” division so I could use a TLR. I don’t practice much with activating the TLR, and it shows. However, it’s still better than trying to shoot one-handed.

Drawing was a consistent issue for me; the holster I was using had no cant, and was further back than I usually wear a holster (thanks, IDPA!). Once I got the gun into my hands, the shooting bits proved not to be too difficult. Moving and thinking, that’s hard!

Let’s go through this stage by stage:

Stage 2 went well, except for being dumb and shooting over the barrel for a PE. Could have been faster on the swinger, but also watched a bunch of dudes waste time mag-dumping into it, sooooooooo… believe it or not, I would up 3/28 on this one even with the PE.

I forgot to take video of stage 3, but it was all inside the “house” anyways. I shot OK, but had more points down than I should have. No obvious screwups other than that. Came in 9/28.

Stage 4 was good shooting but poor stage planning. I had not remembered that a fault line didn’t exist for this stage and was shooting at an angle when I didn’t need to. Burned a good five seconds or more with that nonsense. Reload was smooth, though. Came in 17/28. I could have finished top ten easily if I had not screwed around with the imagined fault lines and just shot it moving the entire time.

Overall, I came in 7/28, and 7/10 in WML division. That’s a good showing for me, but let’s face it, WMLs are cheating. It was a fun match, and a nice refresher on shooting in the dark. I think that a few more matches will get my stride back in both USPSA and IDPA, and I should have at least one more before the year is out.