After my last post, I spent some time back on the floor checking out the latest and greatest from various manufacturers.

Lyman/Mark7: No new products for SHOT from Mark7. We had a conversation about my own Mark7 Evolution press, and the growing pains that Mark7 has had in the past couple years. Long story made short, support was not always as good as it should have been. But that has been steadily improving, and I can attest to it from my own personal experience. Once they get their supply chain under control and can ship product faster, I suspect they’ll be even more popular.

Here’s the bad news: it’s an AmmoBot, there was no sensor suite, and it’s like $2400. I am sure the Dillon diehard crowd will ignore these problems (disclosure: I own a Dillon 650 and have loaded a ton of 9mm on it), but I simply don’t see how this competes with the Mark7 autodrive in any way other than “well, you get to keep your warranty!” It doesn’t seem to know if you’re out of primers… let that one sink in. On the positive side, the DA3000 is probably phenomenal for bulk case processing with the CP2000, because it’s basically just a way to mechanically cycle your press and not much more.

Magpul: Magpul had a few outstanding product releases the week before SHOT, but the most intriguing was the “X4” collaboration between Maztech and Magpul. The X4 is what I thought it was: a heads-up display for your rifle that uses sensor fusion to provide its benefits. The two big ones are a round counter and a laser rangefinder. The Maztech engineer I was chatting with was really enthused about it, and the state of maturity it was already in. He was talking a Christmas release for the civilian side. It’ll work with 30mm and 34mm scopes, but here’s the limitation: you can’t have an objective bell. It needs to be a straight tube. This rules out scopes like the Accupower 1-8x and the Razor Gen2-E. The Vortex Razor Gen3 will be perfectly fine, though.

Hot take: this is Magpul’s attempt to enter Wilcox’s space. We’ll see how it works out.

Girsan: Girsan didn’t have a whole lot to announce. They seemed less than pleased with me when I told the optic they were including on the 1911 was garbage, and they needed some more optics plates included. Not everyone appreciates my expert product management consulting services even if when they’re free, oddly enough. Their big new product of the year is their Browning High Power clone, the MC P35. It feels like a BHP, and it has a trigger like a BHP. It scratches the itch.

SAR USA: SAR USA and the gent I spoke with were quite enthused with their products. I think this is justified; I love the heck out of my SAR K2, but the after-market sight situation is awful. They told me they were working on it this year (in fact, at SHOT!) and to expect better. The rep acknowledged that they’re just not great at marketing, and have made that a much bigger focus going forward. In my opinion, SAR is a hidden gem; they’re the Turkish military’s pistol manufacturer, and they don’t make many lemons. I also saw SAR proper’s rifle display, including a nifty 7.62×51 rifle. Unclear to me if this was going to be imported. It has a carry handle with backup irons… I’m not sure what the use case is.

Bushnell: Not much new from Bushnell on the high-end optics front. The DMR3 and XRS3 were very nice scopes, with excellent reticles (no illumination). A new high-end LPVO is completely MIA, which is a gaping hole in their line-up. The world is ready for an SMRS III, guys… make it happen.

Federal: One of the big SHOT stories this year is 30 Super Carry, and Federal had a nice little display out. I was the only one at it when I visited. That’s a little disorienting, and makes me wonder if there’s really a lot of market demand for it. They had a couple of 1911s (one was a sweet Nighthawk), a Shield EZ, and a Shield Plus there. They all held like +2 rounds when using 30 Super Carry as advertised. My personal feeling is that in this day and age of stagger stack mags in micro compacts, that additional +2 rounds is a lot less critical than it is in single stacks.

Kel-Tec: Kel-Tec is a quirky firm, and they never fail to deliver at SHOT. This year, their hot new items were the aluminum-frame P15 handgun and the P50 carbine kit.

The aluminum-framed P-15 is a bit more conventional, but it represents Kel-Tec’s first gun with an aluminum frame (or so I was told). To be perfectly honest, I didn’t even realize I was holding what was apparently a prototype pistol in my hands. It’s surprisingly classy. (I guess this is a Hebrew Hammer Blog exclusive because I’ve seen zero other outlets report on this.)

On the downside, they did disappoint me by saying that the PLR/SU lines were basically dead for the time being. No MLOK handguards incoming. 😦

Aero Precision: Aero was showing off a Remington 700-style action and chassis. It’s still under development, but, hey, it looks good to me. If you are expecting an ultra-cheap barreled action with bolt, you are going to be disappointed; the rep’s numbers were closer to a thousand dollars if I recall correctly.

Hurricane Butterfly: Finally, we have Hurricane Butterfly. HB was importing some sweet mag-fed Hawk 870s in some oddball configurations a couple years ago, but there was apparently some patent litigation that put a stop to that for a while. It was unclear in our discussion whether they were going to go back to doing those imports. They also brought in some HK416 pistols that were about as close to the real thing (without full-auto) as you could get. It sounds like they’re currently focusing on value-added import/export activities (such as setting up ACOGs with offset spacers) while they figure out their long-term business plan. I’m hoping to speak more at length with them tomorrow, because they are one of the few small firms that seems to be genuinely creative in what they do. 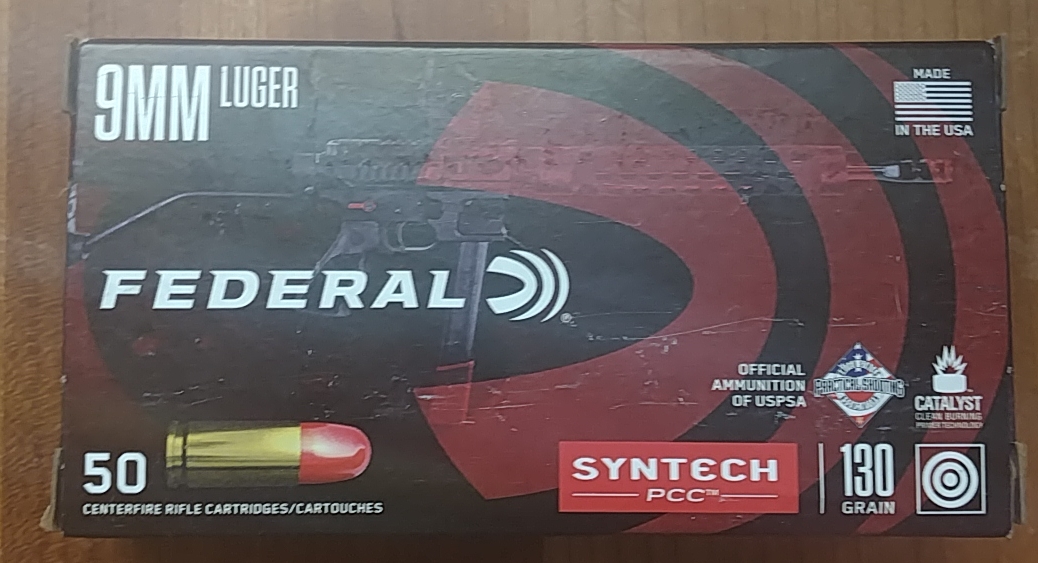 I was recently contacted by the TargetBarn company – an online ammo and targets retailer – and asked to do an ammo review for them. I was humbled by this opportunity, and we spent a couple exchanges deciding what ammo made sense for this and what protocols I’d utilize for such a review. Obviously, reviewing some bulk blaster 115gr was not going to be terribly interesting to anyone involved (including my readership), and I lack the facilities and time to do proper gel testing on JHPs and similar self-defense ammunition.

We landed on Federal Syntech 130gr “PCC” 9mm ammo. Did you know Federal made PCC-specific ammo? I did not before encountering this ammunition! I am broadly familiar with the “regular” Syntech ammunition, having successfully shot about half a case of the 150gr 9mm variety in competition and classes, but have never used this stuff before. I felt that that made it a good candidate for a review.