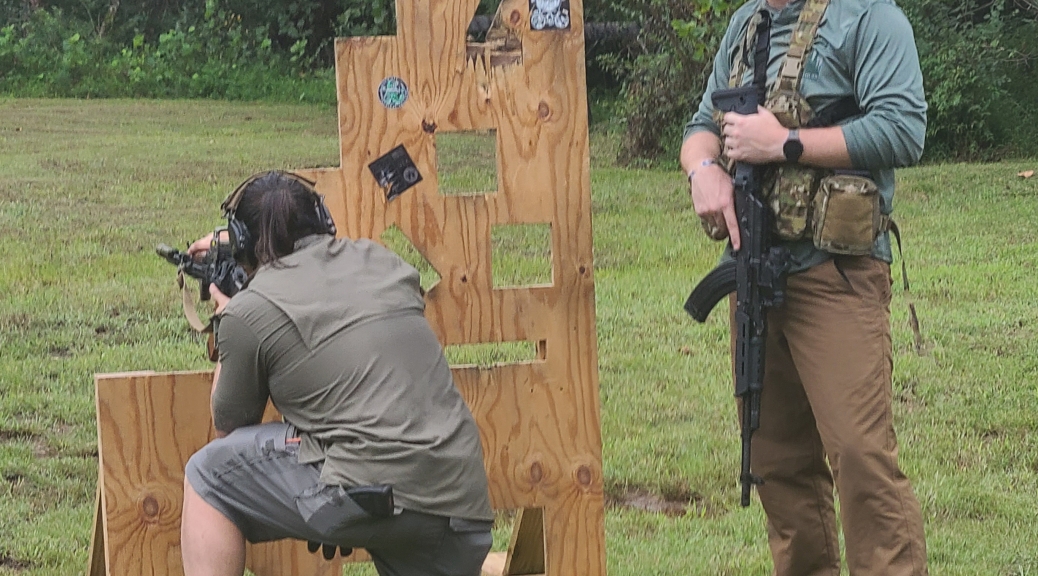 The first really expensive guns I ever bought was a Galil SAR SBR that was built by the fine gentlemen “TennGalil” over at Hillbilly Firearms . The full build cost me about $2000, which, in retrospect, I suppose doesn’t sound like a lot compared to what higher-end AKs cost now.

Despite it being a rather amazing piece of kit, I barely ever shoot it anymore. There’s not a lot of room in the competition world for an iron-sighted AK if you care about really competitive. Thus, I was quite enthused about Green Ops offering their newer Defensive Kalasknikov class You can read on for my impressions.

END_OF_DOCUMENT_TOKEN_TO_BE_REPLACED

IWI-US has announced the release of the Galil ACE Gen II guns. For now, it seems like the 7.62×51 ACE isn’t being upgraded, but the 5.45×39 version is getting a bump to full-production status.

As you can see from the picture, there’s been some changes:

My personal take is that this was probably a manufacturing optimization as much as an upgrade, but it is an upgrade nonetheless. Keen readers would be advised to keep their eyes open for closeout Gen I ACEs at the usual suspects.

On a similar note, IWI also recently released a minor update to the Uzi Pro, giving it a threaded barrel.

IWI announced a limited edition release of the Galil ACE in 5.45×39, with 16″ rifle and 8.3″ pistol variants. This is pretty cool, as there are not a lot of new 5.45×39 guns coming on the market these days, and even fewer that AK-74 magazines. They are being directly sold through IWI. There are supposedly only 545 of each model being made, so there is some scarcity involved.

Unfortunately, it’s $1850 (pistol) and $1900 (rifle), which is a little too rich for my taste as an impulse buy, even if they would ship the rifle to MD. On the plus side, 500+ of each means that some will eventually wind up on the secondary market, so maybe I’ll get another bite at the apple…

SHOT Show is in full swing, and I’ve been working the floor to see what’s interesting. I’ve only been here about two hours, and I’ve already got plenty to talk about. This post will cover some interesting stuff I found at Ikon Weapons, ABA Arms, Tyrant Designs, C4 Precision, Blue’s Bullets, Gas Block Genie, HasGrok, and Cloud Defensive.

END_OF_DOCUMENT_TOKEN_TO_BE_REPLACED

So, I have been less active posting to the blog because I’ve been buying less and doing more. This is not a bad state of affairs, but can admittedly be on the boring side of things if you’re the reader of an Israeli firearms blog! (It also didn’t help that IWI hasn’t released any of their new guns yet… so much for release dates.)

One of the things I’ve been doing more of is training. Training is a tough commitment, but I’m in a place in my life where I’m finally in condition to do more of it, and I’ve been trying to make a priority of it. Finding good trainers is hard – most of them seem content to do CCW courses and “your first gun!” classes. There’s nothing wrong with those, but when you want more advanced training, you’re either looking harder or traveling.

I am very pleased to say that Green Ops in northern Virginia is one of those real-deal advanced training providers, and they’re worth every penny you throw their way. I’ve taken a number of courses with them, and this after-action review is for their Defensive Carbine Clinic.

END_OF_DOCUMENT_TOKEN_TO_BE_REPLACED

According to IWI-US on Facebook, the second-generation 7.62×39 Galil ACE pistol (aka, “GAP-II”) is now shipping to dealers in both standard and “brace” versions. Presumably, this model won’t have the “third pin” feature that got IWI in so much trouble last time. No word on the pistol version of the 7.62×51 ACE yet.

IWI-US has consistently promised that the ACE stock assemblies will be made available to the public by the end of the year, so your chance to build that sweet, sweet Galil ACE SBR may be coming up soon.

Speaking of upcoming releases, IWI-US also promised in the comments that we’d be seeing the 5.56×45 ACEs in early 2017. These could be a big hit, albeit the Zastava M90NP is pretty popular in the market right now…

I saw on Facebook that IWI-US is now shipping the 7.62×51 Galil ACE rifle to dealers. Their website currently only lists the GAR 1651 model, which comes with a 16″ barrel and takes SR25 magazines. Curiously, there is no mention of the 18″, 20″, or pistol variants. I would have expected the pistol variant to have beat the rifle out the gate due to import restrictions.

I suspect that the 7.62×51 version of the rifle is going to meet with much more success than the 7.62×39 version. The 7.62×39 version suffered quite a lot from comparisons to cheap Zastava and slightly-less expensive Arsenal AK rifles, and was somewhat overshadowed by the PSA KS-47 and CMMG Mutant Mk-47 rifles. Other than the VEPR-308 and Zastava PAP M77 rifles, there’s not a whole lot of competition in the 7.62×51 AK rifle market, and there’s certainly nothing that takes SR25 magazines. I also think that the market for higher-end 7.62×51 rifles is somewhat more robust (as evinced by the SCAR-17’s continued sales at $2600). If the street price lands at $1700-$1750, it will be competitive with higher-end 7.62×51 modern sporting rifles.

Personally speaking, it’s certainly the most appealing ACE to me, but I’d prefer it with a 20″ barrel.

(photo from Guns, Holsters, and Gear)

The newest AK on the market is the “Alfa” from CAA and was revealed at SHOT 2016. GHG has an amazing article on it. It appears to be a CAA design, and has some rather radical changes from the standard AK design. It was supposedly designed with IDF personnel input, which makes sense – you can see how the stock is now inline and higher for compatibility with AR optics, and all the controls seem to be ambidextrous. It looks like a two-piece receiver design, ala the M+M M10X, but you can see that the recoil spring is still behind the bolt (unlike the Sig 556 or M10X, where it’s up front by the piston).

My only quibble is that the weight is on the heavy side – 7.7lbs. This makes me suspect it’s a chassis on top of a traditional steel AK receiver, rather than a truly re-engineered steel-reinforced polymer receiver like the SCAR-16S (7.25lbs). But it’s still lighter than a Sig 556 Classic (8.2lbs), albeit not quite as svelte as the Galil ACE (7.5lbs). Some of that additional weight might be from the huge AK-74-esque muzzle attachment, too.

There’s also a Galil-mag 5.56×45 version, which is a bit of an odd choice. As evinced by the popularity of the Zastava M85NP, the AK market prefers AR magazines when it comes to 5.56×45, and the gun itself clearly has a chassis that would lend itself to modification for AR mag use.

In any event, it’ll make an interesting competitor to the ACE, and is another Israeli rifle for “the list”.

So, some interesting news from Full30: IWI-US has quietly sent a letter to dealers asking them to send back their Galil ACE pistols, and to give them information on who they sold them to:

To whom it may concern:

Following our email of yesterday, we are instituting a recall of all GAP39 pistols.

Please pack up and return all GAP39 firearms in your inventory to IWI US. You can ship freight collect (YRC preferred).

Additionally, we will need you to provide us with the names, addresses, telephone numbers and email addresses of all FFL Dealers and/or individuals that you sold to. We will contact them with instructions on returning guns in their inventory to IWI US along with enlisting their support in contacting all consumers for return of the guns to IWI US.

Full credit will be given for your returns while dealers and consumers will receive a full refund with submission of receipt copies.

It would be in everyone’s best interest to contact these dealers ASAP.

FYI, this is not a safety related recall, but a possible NFA violation that must be corrected.

We appreciate your support and understanding in assisting us with all facets of this recall.

A bit more discussion after the break…

END_OF_DOCUMENT_TOKEN_TO_BE_REPLACED

The Galil ACE 32 pistol was recently released into the wild, with the sort of reviews you’d expect in conjunction with a 6lb rifle-caliber pistol. I am going to guess sales have not been brisk, because I’m already seeing them advertised in the ~$1425 range – which is pretty much as low as I think they’ll go without IWI reducing the MSRP. This street price is relatively competitive with the Arsenal SAM7K – the Arsenal is somewhat cheaper, but the Galil ACE 32 is a much better value when you consider the whole package.

The point here is not “go out and buy a Galil ACE 32 pistol”. I mean, sure, if you’re in the market for one, go buy one. They’ll eventually be a good SBR platform, and the price isn’t going to fall much further soon. But it also means that my guess about Galil ACE 32 rifles being around $1550 on the street is looking pretty solid. I imagine the rifles will be more popular than the pistols, but the competition is so heavy now (M+M M10X, Sig 556xi, PTR-32 Gen II, the various Zastava rifles, etc.) that I think they’ll need those heavy discounts to sell.