In the Israeli war of independence, the Haganah was using whatever weaponry it could get its hands on – Kar98ks, Sten guns, SMLEs, etc. But after the establishment of the state, the new IDF needed more of a standard service rifle – and that rifle needed to be modern and capable. Hence, the FN FAL rifle and FN FALO squad automatic weapon were purchased and, later, domestically manufactured. As is common with the FAL, these Israeli variants have their own peculiarities.

I happen to own a semi-auto build of an Israeli pattern FN FALO built on an Entreprise receiver. Some thoughts after the jump.

I’m not an expert on FN FALs, so I really advise you to read this wiki article on them first.

The first thing that’s really quite interesting about the Israeli use of the FAL is how fast they got on board with them. According to the book “The FN FAL Battle Rifle“, the Israelis put the FAL in service in 1955, which was a bare two years after the rifle was put into production in Belgium. These purchased rifles were used in 1956 in the Suez Crisis. Later on, Israeli-manufactured rifles were used in the Six Day War and the Yom Kippur War. The story goes that the Israelis traded the license for the Uzi to FN for the rifles and the license to make the FAL.

But, if that’s not blowing your mind, also consider this: 7.62×51 was only standardized by NATO in 1954. Yes, that’s right: the Israelis were using western-standard calibers and armaments before NATO. Starting in 1958, the Israelis also began rebarreling their Kar98ks to this same caliber, presumably to simplify logistics for reserve forces. 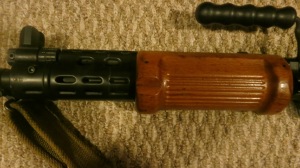 As alluded to at the beginning of this article, the Israeli-manufactured variant has some unique characteristics. First and foremost: the furniture. The plastic pistol grip is pretty normal. The stock is mostly normal, but has a hinged buttplate ala the M14. I believe this is supposed to help when firing from the prone position, or when using fully automatic fire.  The wooden handguard is very distinctive, as it has a very prominent perforated metal heat shield extending from it. IMHO, it would have been a little better if the handguard were longer,  but there’s no denying it does the job well. 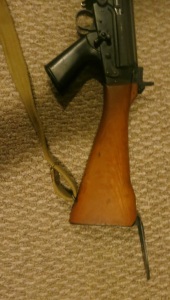 The sights are also higher than normal, despite this being a “metric” FALO. It doesn’t seem like they’re as high as the Commonwealth sights, though. The rear sight post is a bit thicker, and makes it a bit easier to use as a peer sight. There are no provisions for mounting an optic – my understanding is that the Israelis used the Trilux on their M16s, not their FALs.

Some of the other parts differ as well, many in the gas system. The Israelis also use their own barrel thread type – supposedly this was the original barrel threading, and FN modified it later after Canadian adoption. This is why the Entreprise Israeli Match receivers aren’t actually “match” receivers in the sense of a competition – they simply have the correct threads for installing an Israeli barrel. 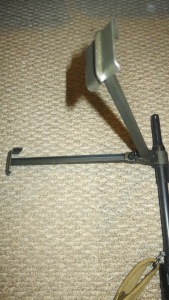 Since Israel was the source of most (nearly all?) of the FALO kits on the American market, the bipod is certainly worth talking about. In short: it’s tough and easy to use, but it’s also heavy and doesn’t seem all that great at being a stable firing platform. I found that it moved around a lot because of the “ski feet”. It also puts the gun rather high up due to the long length of the legs, but at least the magazines don’t act as monopods.

That heavy bipod contributes to the (huge) 13lb weight of the FN FALO. This is the first gun I’ve actually used the carrying handle on, and it really does make it easier to haul around. I guess that 13lbs feels light compared to the BAR’s 20lbs, but considering that the infinitely-superior FN Minimi and IWI Negev LMG only weigh 16lbs, it’s easy to see why this gun went out of service way before the normal-weight FN FALs. (There are very, very few “light-barrel” Israeli FN FAL kits on the market – I suspect these were either sold to another country or are being held in reserve.)

On the plus side, the safety on the FALO is the friendly AR-style, and it can be used without taking your hand off the pistol grip. I did not find the trigger pull to be bad, either. The magazines are rock-and-lock – this is not my preferred system, but the forgiving magwell makes it easy enough to use. I don’t love the bolt hold open or magazine release controls, but they’re usable. The charging handle is non-reciprocal and easy to grab (if you’re a righty). 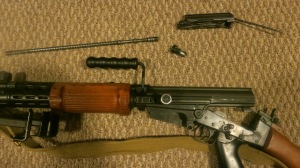 Field stripping the FN FAL is refreshingly easy, though. Pull a lever on the lower receiver, break open the hinged receivers, and pull the bolt carrier group. Removing the gas plug and piston is also trivial – simply push down a detent on the gas plug, rotate, and watch the whole assembly spring out at you. I am a little more concerned about reassembly – it’s a bit too easy to put your rifle in grenade launcher mode by accident if you put in the gas plug incorrectly.

Unfortunately, without a quick-change barrel or a higher-capacity magazine, the FN FALO isn’t a good squad automatic weapon. The bull barrel helps accuracy over sustained fire, but is ultimately not going to be able to keep up in an extended engagement. One is reminded of the Soviet experience with the RPK, except that the RPK at least had 40rd magazines for sustained fire. There are factory 30rd mags for the FALO, but these are also reportedly responsible for the “bang, bang, click” (two rounds fired, and then a misfeed) syndrome that plagued all variants of FALOs. I’ve never seen an Israeli-marked 30rd magazine, either – I don’t think they used them. If they had, I would expect to see them all over the surplus market, and they’re not. (If anyone has conflicting info, please let me know.)

Taking my FN FALO to the range, I found it to be long, heavy, and cumbersome. The rifle was accurate, insofar as the FAL is a 2-3MOA gun even with quality ammunition. The rear sights that the Israelis put on their FALs were pretty decent, and a step up from the usual FAL rear sight. I found the irons usable, but also discovered that my ability to shoot with them degraded pretty quickly as range increased, and had a difficult time producing decent groups at even moderate (100m) ranges. The FN FAL iron sights are famous for being inaccurate (poor design, loose fit, mounted on different receivers), so I suppose I shouldn’t be so surprised.

As mentioned before, the bipod didn’t really work as well as I wanted it to. Rubberizing the feet probably would have helped, but this is really 50’s production technology we’re talking about… I probably shouldn’t have such high hopes. I found the hinged buttplate somewhat more useful for getting a good sight picture when shooting from the bench, so the Israelis got that part right.

In summary, it’s not hard to see why the FALO variant of the FAL died an early death, and never attained much popularity to begin with. The advantages it brings aren’t very substantial over the regular FAL, and you pay a really rough price in additional weight. It was acceptable as a BAR replacement, but the BAR was never all that great of a squad automatic weapon anyways.

On the other hand, the Israelis did a pretty fine job with their variant of the FN FAL and FN FALO. The rear sight is improved, and the furniture is excellent. If I were going to do a new build of an FN FAL, I’d certainly try to find a reasonably-priced Israel FN FAL (not FALO) kit to build it with. The FALO looks sexy, but the FAL is a far more usable rifle, especially as a semi-automatic-only affair.

11 thoughts on “The Israeli FN FALO”