Here’s a good joke:
Q: What’s the worst part about a handgun?
A: It’s not a rifle.

OK, maybe it wasn’t a good joke. But, still, the point remains: if the choice is between a handgun and a rifle, you are generally better off choosing the rifle. Rifles are easier to shoot, usually have better sights, and usually have better optics and accessories mounting options. If you asked me to grab a gun to defend my family, my Tavor would be the first thing coming into my hands.

But… what if your handgun could be a rifle? FAB Defense makes an innovative kit called the KPOS that converts many models of handgun into a “carbine (PDW)”. It is distributed in the USA by the Mako Group. In countries like Israel, where you can only buy a single handgun as a civilian, this increases the versatility of your weapon. In the United States, if you’re willing to pay the $200 tax to make an short-barreled rifle (SBR), it gives you what could very well be the lightest pistol caliber carbine on the market.

To me, this is basically a total conversion of the Glock 17 into a new weapon – an Israeli-designed weapon. And that makes it fodder for this blog. I took the plunge with my Glock 17 Gen3. What did I think? More after the jump.

Back in the first quarter of 2013, it was becoming very apparent that Maryland (my state of residence) was going to pass a (somewhat neutered) assault weapons ban. I had always wanted a Glock SBR, so I quickly purchased a Glock 17 Gen3 so my FFL dealer could transfer it back to me on a form 4 as an SBR.

At that point, I had to figure out what rifle chassis I was going to put on it. Short Barrel Shepherd, whose blog I highly recommend, has a terrific roundup of the three main competitors in this space. For me, the choice was clear: I wanted to go small, light, and quiet. That meant the KPOS system. 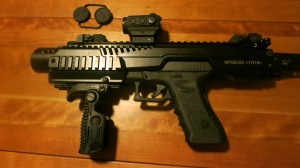 The decision between the KPOS G1 and KPOS G2 was tricky. The G1 is lighter and smaller, but requires changing out the slide cover plate on the pistol for the charging handle. The G2 requires no such modifications, and is not that much heavier or bigger. I also liked how the G2 had a stock with an adjustable angle, which would give more flexibility with my optics options. Thus, I went with the G2.

I bought my particular KPOS G2 used (“like new”), but it came with all of the factory accessories and case. The case, IMHO, is on the small side – I suspect it was used for the KPOS G1, which might have fit better. You can stuff the fully-equipped KPOS G2 in there , but it’s a very tight fit. 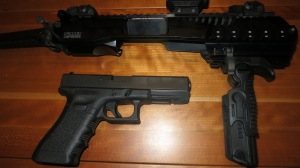 The included bungee-style single point sling is also pretty meh. I am a big guy, and I did not find it comfortable to wear. I also felt that the KPOS’ sling loop did not inspire much confidence – it appeared to be about the same as the key ring I carry in my pocket. A proper QD socket would have been better.

The KPOS G2 itself, on the other hand, is a pretty fine piece of machining. Finish was excellent and all of the parts smoothly fit together. It includes a folding VFG that acts as a trigger-blocking safety – clever idea, albeit one that’s slightly cumbersome to use on a frequent basis. 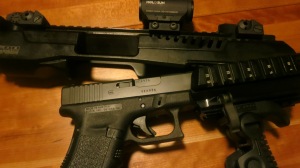 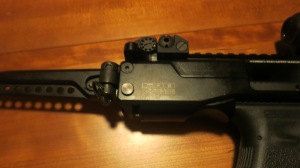 Installing the KPOS G2 is simple. You rotate/open a lever and pull a pin on the chassis, pull the stock upwards to open the chassis on a hinge, and insert the Glock in muzzle first. After that, you rotate/close the lever, push the stock down, and then reinsert that pin. You could probably do it in thirty seconds with some practice – the only tricky part is really making sure that the Glock rail slides in on the chassis rail.

The first thing you notice when you pick it up is “wow this thing is light“. It tips the scales at ~3.6lbs without optics or lights. The only guns that even come close are the Kel-Tec Sub-2000 at 4lbs or the Kel-Tec SU-16D9 at 3.7lbs, neither of which include a VFG or accessory rails out of the box.

It’s also rather small. As you can see from the above pictures, it’s a bit under the size of my Uzi, roughly comparable to a Mini Uzi… and half the weight. Notably, this also means that a Micro Uzi is going to be smaller – there are limits to what a design like this can accomplish.

Fit inside the chassis is good and mostly-tight, albeit they could have made the rear connection a little tighter. I’ve heard of people using stacked strips of electrical tape to snug up the back a bit, which seems like it has some merit. It has four rails for optics and accessories – the bottom rail is taken up by the VFG, of course.

The stock has slight vertical play. I don’t think it’s unusable, but it’s slightly annoying. I believe this is related to some tolerances in how the back of the chassis closes up. The stock is otherwise comfortable (if short), doesn’t lock closed, and can be closed quickly and smoothly (unlike the Galil, which really takes some tugging). It’s the sort of stock that would probably work well on other 9mm pistol-based SBRs.

The charging handle on the KPOS G2 is “AR-like”. It does the job, but is slightly hard to grab. It also isn’t terribly smooth – there’s more friction than I would expect, and you can’t just pull it out to lubricate it, like I would do with an AR-15 charging handle. Oh, and good luck getting your paws in the right spot to lock the slide open… definitely not simple. Still, I appreciate that it’s ambidextrous and doesn’t require me to change parts on my G17 to use it.

The only manual safety on this setup is the VFG, which, as previously mentioned, can fold itself over the trigger to block it. I felt like the VFG was a good idea, but the execution was so-so – the button to fold it was sometimes sticky, and you have to depress both sides of the VFG to retract the “safety” portion.

My particular setup uses Troy Micros for backup iron sights, and a Holosun HS403C on a YHM Half Inch Riser for the optic. The stock pictures of the KPOS often show a Mepro M21 riding it, and that’s just not going to work with any sort of useful cheek weld, even with the stock at the highest angle possible. Realistically, you want something at absolute co-witness-height (for ARs) or lower.

On the range, I found the KPOS setup to be extremely reliable, using both 17rd and 33rd factory magazines. I only had one failure, which was a failure to eject. I’m pretty sure it was an under-powered reload. Recoil was a bit more brisk than expected, but reloads were as smooth as without the stock. “Hand finds hand” indeed.

UPDATE (8/28/2015): I do have some more serious quibbles about accuracy after having used this gun for a year. There is enough play between the stock recoil box slider and the back of the gun that you wind up with slight point of impact shifts from the way you hold your gun. You can do reasonably well from a bench rest, but in offhand usage, you start going minute of pie plate a little faster than I’d prefer. I suspect this could be fixed with some judicious shimming with electrical tape, but I’d encourage FAB Defense to think about a more elegant solution for the KPOS gen 3, whenever that comes about. I still find that I’m able to shoot more quickly with the KPOS, of course.

Of course, that said, you’ve also got to put this whole setup into context. It’s $1200 when you start factoring in the cost of the gun and the stamp. What you get out at the end is an interesting pistol/rifle combination that’s still shooting in a pistol caliber. Unfortunately, pistol calibers are pistol calibers, and they are greatly limited in range and stopping power compared to rifle calibers.

Is it worth it for most American gun owners? Probably not. I see the utility for some foreign markets, but Americans have access to the reasonably-priced Kel-Tec Sub-2000, which folds up small and is nearly the same weight as the KPOS setup. I personally don’t love the Sub-2000, but the $700 price difference is very difficult to ignore.

Now, if I had a tricked-out Glock already, I could actually see this being a slightly better deal. The problem many pistol caliber carbines (PCCs) have is that they don’t have much of an aftermarket – if I had dumped a few hundred bucks of upgrades into my Glock, I might very well want to leverage them into a PCC. Also worth noting: you can get a Glock in 10mm, so if you want a PCC in that caliber, this is basically your only “easy” choice.