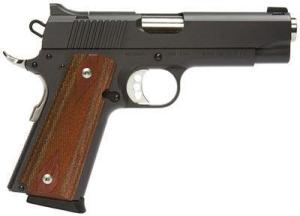 One of the more sordid corporate firearms-related stories revolving around the Internets has to do with how the Charles Daly / KBI firm was ultimately bankrupted when an Israeli manufacturer, Bul Transmark, decided to screw them in favor of Magnum Research.

The story is interesting, and perhaps not well-remembered today, so I thought I’d write about it.

Once upon a time, in the 2008-2009 timeframe, Mike Kassnar, then president of KBI / Charles Daly, asked his forum members what they’d like to see in a new 1911. Apparently, the verdict was “bushing barrel”, “rear serrations only”, and “Novak sights”. Even though these sound like stupidly obvious design features to a 1911 fan these days, they were apparently something of a revelation at the time.

KBI approached BUL Transmark to make their fancy new 1911, and supposedly invested substantial corporate resources in improving the relationship and making sure the 1911s were up to standard. Remember that, until this point, BUL had only been making the M-5 (polymer 1911), BUL Impact (a weird polymer Tanfoglio / 1911 hybrid), and the BUL Storm (steel Tanfoglio copy). BUL took Mike Kassnar’s specs, and built a pretty steel 1911 using them. This was to be the Charles Daly G4.

You can look at the thread on the M1911 forum for some historical tidbits.

Unfortunately for KBI, they apparently never signed any sort of exclusivity agreement with BUL. They were stunned, therefore, to find out that BUL was going to sell the exact same pistol to Magnum Research. A choice quote from the man himself:

During my meeting with Bul, I was informed that Bul had decided to supply Magnum Research (MRI) with a 1911. At first, I was furious that they would do this, particularly since they had not yet delivered the first G4 to us. Their reasoning was that KBI would not be able to handle all of the volume Bul intended to produce and that we shouldn’t mind as everyone has a 1911 and the gun that Bul would supply to MRI was just another 1911. I agreed that there were many 1911’s on the market, but only CD would have the G4.

However, I was then informed that MRI wanted a 1911 with the exact same specification as the G4 and that Bul would produce it for MRI “per the customers request”. It seems that somehow MRI had determined that the best configuration for a 1911 was one with rear slide serrations only, a bushing barrel setup and Novak style sights. I wonder where they got the idea that such a configuration is what the market wanted?

I then informed Bul that they had to decide between KBI and MRI. I would not buy the G4 if Bul intended to supply the exact same gun to MRI.

Bul insisted that they had no choice but to supply MRI with what MRI wanted and that was the end of our meeting. I had a few choice words for Bul and then returned to my hotel.

So, yeah, some pretty bad feelings. Charles Daly dropped the BUL M-5 pistols they had been importing in retaliation, too.

While sympathy here in the US was squarely on KBI, you do have to look at the situation from BUL’s perspective: they just started a new product line, and they needed to sell as much of it as they could. There was nothing terribly unique about the G4, so if Magnum Research wanted the same thing… well, why not?

It was, though, something of an underhanded tactic by Magnum Research to request the same exact gun from the same manufacturer. It’s not 100% clear that they did this on purpose, but since KBI apparently got the Jericho import contract shortly after they lost it, it seems like a strong possibility. I suppose Mike Kassnar did get the last laugh, though… now he’s running IWI’s US operation, and he’s gotten the Jericho back from Magnum Research. He’s got the hottest guns on the market, and none of them are from BUL, and Magnum Research has access to none of them.

The whole story is a reminder that you’ve got to put your intentions in writing, in a signed agreement, if you’re going to be an importer. Handshakes don’t work, and even the nicest people still want to make a buck. BUL has only recently found a new importer for its M-5 and Cherokee pistols, and you’ve got to wonder if the blowback from the Charles Daly / Magnum Research affair might have made US companies a bit wary of dealing with them.