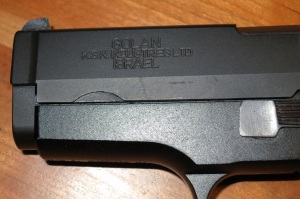 Israel has always had an “interesting” history when it comes to arms deals. They are clearly a friend of the US, but have sometimes done deals with countries that may not have always had US interests foremost in their minds. They also have a bit of a history in not always abiding by arms embargoes… most famously in the case of South Africa during the apartheid era.

One gun that has that semi-checkered history is the KSN Golan, which is a copy of the CZ99 Compact-G.

The CZ99 was developed in Yugoslavia, by the well-respected Zastava Arms company. Say what you will about the political stability of the Baltic states, but American shooters have always admired the quality of firearms coming out of Yugoslavia and Czechoslovakia! Zastava was in Yugoslavia, and when that country split in a post-Soviet-collapse civil war, an arms embargo was put in place on all parties.

This was not very good for business if you were an arms exporter, so Zastava licensed out production of their newly-developed CZ99 pistol to Israel (KSN Golan) and South Africa (Tressitu TZ99). It has been alleged online that the license was passed from Israel to South Africa (ie, production was not simultaneous), but I’ve never seen a source to confirm it either way. The CZ99 and TZ99 had some popularity in Israel, which further confuses matters.

I am a little bit surprised that the KSN Golan could even be imported here, given that Zastava must have had some sort of financial stake in the licensing agreement. I’m not saying they’re illegal, of course, but you’ve got to wonder about what exactly was going on. The KSN Golan was made in both 9mm and .40S&W – the 9mm version is featured in this article.

Serbia and Iraq use the CZ99 as their service weapon, and it supposedly has a pretty good reputation in that role. The KSN Golan was not used in a military capacity, but did see some use by Israeli police forces. I would file it into the category of military-grade pistols.

The CZ99 is essentially a Sig P226 slide on a Walther P88 frame. That’s good design DNA, and you can feel it as soon as you pick up the pistol. There are numerous improvements to the P226 and P88, and I would encourage you to read more about it at cz99.org. It is unclear to me whether the Israelis used the chrome-lined machine-gun-steel barrels that the original CZ99 did, albeit mine is shiny enough that I could believe it. 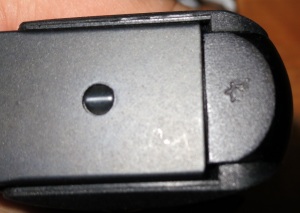 There are Star of David proofs on the bottom of the slide, the barrel, and the heel of the grip. On my particular gun, there were a ton of German proofing marks, too, as well as what appeared to be some sort of additional numbering scheme crudely carved on to the inside of the slide and frame. I am not the only one to have a gun like this, so perhaps these guns were German police surplus of some sort.

The weight and size of the KSN Golan is as about the same as a Sig P229. I regard the P229 as a bit on the chunky side, but in the ballpark of similar “steel” guns. It would not be my choice as a concealed carry gun, but seems adequate as a service weapon. 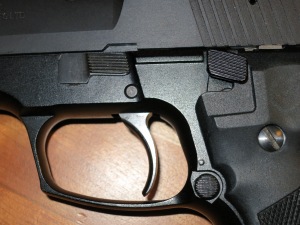 In terms of controls, there is an ambidextrous decocker, an ambidextrous magazine release, and no manual safety. Some people like this sort of arrangement, as there’s no chance of the gun “accidentally” being put on safe. Other people prefer having the option of manual safeties. I’m not really married to either philosophy, albeit I do probably fall more into the latter camp. The loaded chamber indicator is nice to have, given the expectation of condition 2 carry.

The trigger pull is good in single-action mode, but heavier than I’d prefer in double action mode. Ordinarily, this would be forgivable, but this is a gun that’s not designed to be carried cocked-and-locked, so it’s much more noticeable. I would have preferred a system like Sig’s “DAK”, which is double-action-only with a much more reasonable pull weight.

Magazines capacity is 15rds, which is 1-3 rounds less than I’d want. The magazines are proprietary, but you can convert Sig and Beretta magazines by punching in the magazine catch hole. Thankfully, the CZ99 magazines are not too uncommon, but tend to come and go as the CZ99 (or CZ999, or EZ9) is imported. At the moment, they’re slightly tricky to find. They do drop free when released, even when empty. There’s supposedly a Serbian firm that makes flush fit 18rd magazines, and I’d love to see those imported here.

The holster situation is not terribly good. IMI Defense and Fobus both make holsters that supposedly fit this gun, and that’s about it. Most Sig P226 or P229 holsters will not fit due to the additional width that the ambidextrous decocker adds (the Sig decocker is single-sided). To be fair, none of KSN’s guns really lend themselves to easy holster purchasing – the square trigger guards on the Kareen Mk II/III and GAL also screw up fit on a number of otherwise-good holsters for the Browning Hi-Power and 1911 respectively. Ordinarily, I wouldn’t hold the lack of a holster against a gun, but the Golan is clearly a gun that is designed for service use, and that means you need some sort of mechanism to carry it. 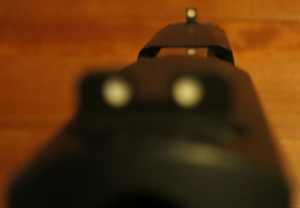 My gun had a loose front sight when it came to me, but some green loctite solved that problem. This is the second time I’ve seen a KSN gun with a front sight problem (my Kareen MkII’s dovetail was cut large), so maybe this is one of those institutional problems that some companies have. The sights were standard 3-dot. 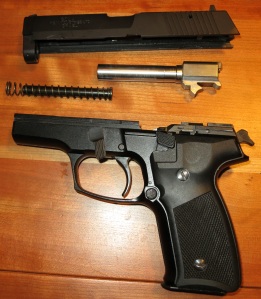 Field stripping this gun is a pleasure, and it’s basically the same as the Sig 226. You lock the slide back, twist the disassembly lever down counter-clockwise, and then move the slide forward right off the gun. From there, it’s the standard guide rod/spring/barrel setup, which is trivial to get apart. Not having to wrestle with popping the slide stop out like you do on the newer Tanfoglios and CZ-75s is really appreciated.

On the range, the gun performed fairly well using Freedom Munitions 9mm 147gr RN ammo. I found that the trigger reset was a little longer than I’d prefer, but enjoyed running the gun in single-action mode. Accuracy-wise, it seemed pretty acceptable. No issues were encountered with using the decocker, which seems to operate quite safely.

Overall, it’s a nice service pistol, but I wish it took Sig 226 magazines and had a lighter double-action trigger. There’s really no sense in paying a premium for a Golan over a CZ999 / EZ9, but if you want to own an interesting moment in Israeli small arms manufacture history, the Golan provides it.

2 thoughts on “The KSN Golan”