Nehemiah Sirkis designed a lot of interesting guns, many of which I don’t talk about much on this blog because they were designed and manufactured in the United States. This is no sin – remember that Browning did most of his best work with Fabrique Nationale in Belgium – but they are somewhat outside the scope of my collecting activities. Sirkis designed a lot of interesting rifles (including some Kimber .22s and the new IWI Dan sniper rifle), but his fame in the United States is generally from his pocket pistols – the Intratec CAT 9, the Cobra Patriot 45, and the Detonics Pocket 9.

But, he also designed one other pocket pistol that made it to the US – the Sardius/Sirkis SD9, manufactured by Sirkis Industries in Israel. It’s a real oddball gun… which is what makes it so interesting.

The Sardius SD9 was originally imported by Armscorp of Baltimore as the Sirkis SD9. Unfortunately, it was discovered that the Sirkis SD9 had some safety issues, so they had to be sent back. The revised guns were called “Sardius SD9”, and they were imported in 1989-1990. I don’t know why Sirkis picked the Sardius name – it’s a gem in the Bible, but that’s about all I know.

Unfortunately, unlike its namesake, the SD9 is not a gem. It can only be described as “cleverly designed, crudely manufactured”, which is not something I often get to say about Israeli firearms. This may be a bit harsh, but this was a gun that was retailing at $350, which was rather a large sum of money back in 1990.

The frame and slide are made from sheet metal stampings, and the gun’s weight reflects that. This feels like a gun that can take a beating, and also one that you could beat someone to death with. In a full-size pistol, this could potentially be considered a virtue, but in a gun that seems to  be going for the backup gun market, it’s a peculiar design choice.

The SD9 is double-action-only, and is striker-fired. There is no pre-load, and it can restrike in case of a failed primer ignition. This is a respectable idea, and somewhat ahead of its time. On the other hand, it’s direct blowback operation, so you are going to need those steel components just so it doesn’t unlock too early (or self-destruct) when you fire it. 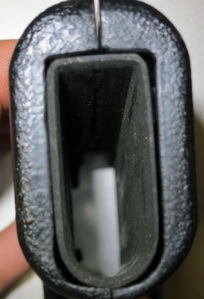 The grips are made of plastic, and appear unnecessarily thick. Did I mention that the SD9 is a bit wide for a single-stack gun, too? It seems odd to me to use thick grips on a frame made of sheet metal.  As a subcompact, the grip is on the short side, but it’s not uncomfortable.

The only controls on the gun are a magazine release and a safety lever. There is no slide stop or last round bolt hold open. The magazine release is in a bizarre spot, in the top middle of the grip. Judging from the manual’s pictures, you’re supposed to use your thumb to hit it, but I could not do it while keeping my hand in a firing position – using the offhand works slightly better. Magazines drop free, not that you’re likely to be reloading this gun in a fight anyways. There’s a loaded chamber indicator at the back of the gun. 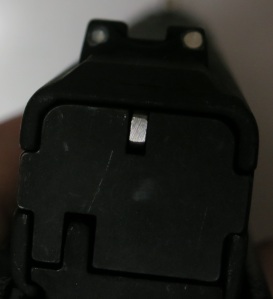 The sights are crude, at best. They’re three dot sights, but the dots aren’t evenly-aligned/painted on the rear sight. They’re theoretically drift adjustable, but the likelihood of anyone bothering is nil. Quality after-market night sights seem like they would be an improvement, but the sights are not the real accuracy problem for this gun…

Now, let’s discuss the SD9’s achilles heel: the trigger. It is the worst trigger I’ve ever pulled. It’s worse than my out-of-the-box S&W Sigma SW9VE. It’s worse than my out-of-the-box Hi-Power with magazine disconnect. It feels like it must be 18-20lbs. The pull is uneven and the trigger wiggles. Maybe some people can deal with that sort of trigger pull  more easily than me, but as far as I’m concerned, you’re going to be lucky to get center of mass hits more than 15m away given the trigger and sights. I don’t mind this limitation – it’s designed as a backup gun for very short ranges – but it gives a really unfavorable impression of the gun to new users.

On the plus side, since the trigger fully loads the striker, you do get a chance at a second strike if your primer fails to go off.

Field stripping the gun is also annoying. You have to punch a pin out using a tool, and then perform some very non-intuitive maneuvers with the slide to pull out the breech block and recoil spring assembly. You have to give Sirkis a lot of credit with the basic design here – he does a lot with very few parts – but it’s pretty clear ease of manufacture was the top priority. A few small tweaks would have resulted in a much easier field stripping process.

For a concealed carry gun, I would have expected a holster of some sort, but I could find no evidence that one was ever made. It’s not so terribly hard to get a custom Kydex rig made, but zero after-market support is never a good thing.

As could be expected, this isn’t exactly the gun you take to the range for plinking. Recoil was on the sharp side for a 9mm handgun due to the direct blowback operation. Further, the horrible trigger made keeping on target at even seven meters a huge chore. If you are concentrating very hard and keeping a really solid grip, you can more or less hit where you aim. Unfortunately, for a backup gun supposed to be used quickly in an emergency, that’s not a realistic limitation. The SD9 is one of the most unpleasant guns I’ve shot, and I have no particular desire to shoot it again. I’ve heard rumors that the feed ramp on the SD9’s barrel likes to break off, so dumping a lot of rounds through it isn’t very sensible anyways.

Unfortunately, I also experienced some reliability issues. The recoil spring didn’t seem up to the task of making the slide feed in a new round out of the magazine, and halted a bit short of the chamber. I was running the gun dry, so maybe some lubrication would have helped, but it was not really an encouraging sign… pocket carry guns can get mistreated pretty badly in terms of environment, so lube isn’t always going to be there.

My take on the Sardius SD9 is that it’s a historical curiosity, but no longer a practical option for concealed carry. The Ruger LC9s is just a better option in every way, not to mention the myriad options from Kel-Tec and others. On the other hand, the SD9 is very fascinating from a design standpoint, so it does make sense for collectors to go after.

5 thoughts on “The Sardius SD9”