While BUL Transmark is best known for their exceptional 1911 handgun lines, they’ve had extensive experience dabbling in Tanfoglio derivatives, too. The BUL Impact leveraged the magazines of their M-5 double-stack 1911 line; the BUL Storm was a well-made Tanfoglio copy that had some success in IPSC.

The BUL Cherokee was introduced in 2000 to replace the BUL Impact and provide a full-frame polymer pistol to the commercial market. It was updated a few years later with a newer frame (recognizable by its finger swells). Read on for my thoughts.

The second generation BUL Cherokee had three different size variants: full-size, compact, and “mini”. The “mini” variant utilized a shortened frame (ala the Tanfoglio BTA90 or Jericho compact). The full-size and compact are still in volume production, and are imported by Battle Ready International. (They were previously imported by Legacy Sports / Howa, which is where I got mine from.) 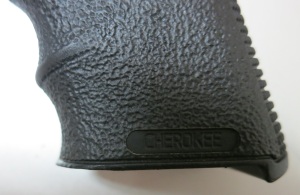 There is a further wrinkle where there are “G” models of the full-size and compact. The “G” models have a slightly wider backstrap, which is supposedly good for users with bigger hands. They’re also compatible with the minimalist tactical stock and the Corner-Shot system, if you have some sort of desire to go the SBR route.

There are also “old-style” and “new-style” (2005) Cherokees. The old-style guns don’t have an accessory rail, whereas the new ones do. The newer Cherokee can also take 17rd magazines, but both can take the older-style 16rd mags. I’m not really sure what drove the change, or if it’s even all that meaningful – the 17rd factory mag from my Cherokee functioned fine in my other Tanfoglio clones (Jericho, Barak, etc.). Your best bet is to buy the E-Lander and Mec-Gar 16rd mags, which should supposedly fit the Storm/Cherokee/Jericho/Barak just fine.

My Cherokee is a new-style BUL Cherokee Compact “standard”. 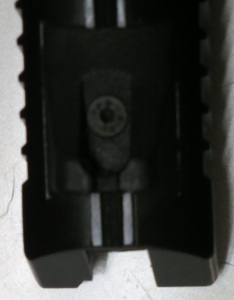 Much like the BUL Impact, the Cherokee continues the tradition of having a molded front sight and a non-dovetailed adjustable rear sight. Again, after-market night sights are not an option, which detracts a bit from its usefulness as a home defense gun. At least this gun has an accessory rail, so you can mount up a weapon light.

While heavier than a Glock 17, the Cherokee is still a light-weight gun at 1.6lbs, and even manages to shave a few grams off the BUL Impact while providing a longer grip. The controls are typical CZ-75 style, and work as expected. The trigger pull felt about average – not very light, but not distractingly heavy, either.

I am not quite as enthused with the grip, which has very prominent finger swells. It fits my hand like a glove, but I wonder if it’s going to fit other people so well. The texturing, however, is uniformly good. I personally liked the balance of the Cherokee Compact, but must admit a general preference towards guns that aren’t front heavy.

Field stripping is exactly like every other Tanfoglio derivative – push the slide back a fraction of an inch and then use a magazine base plate to push out the slide stop. The slide can then be removed, and the barrel and recoil assembly can be taken out.

The Cherokee was unremarkable on the range. Reliability was perfect with 147gr Freedom Munitions ammo, and all controls worked as expected. Accuracy suffered a bit due to the short sight radius, but was otherwise acceptable for a combat pistol.

5 thoughts on “The BUL Cherokee”