Well, you’d have a BUL Impact. Read on for more.

The BUL Impact was released in 1998 as a double-action complement to the popular BUL M-5 double-stack (but single-action!) polymer 1911. It transitioned off the BUL website around 2005-2006, so it probably had about a seven year manufacturing run (some of which was concurrent with the BUL Cherokee gen 2). It does not seem to have been terribly popular, given the lack of information about it on the Internet.

The Impact was imported to the United States by KBI as the “Charles Daly DDA 10-40/10-45”. There were also some 9mm DDAs made, but I don’t know if Charles Daly imported them, since all the ones I’ve seen have a Century Arms import mark on them (ie, they were purchased from BUL directly as part of CD’s bankruptcy). The .45ACP versions are relatively common, the .40S&W versions less so. The 9mm guns are a rarity – mine was very difficult to track down. I guess, in theory, I have a DDA 10-9, not that it’s labeled as such.

The BUL Impact is unique in being a polymer hybrid of a 1911 and a CZ-75. It takes double stack 1911 mags and has the corresponding grip angle, but operates more like a CZ-75 otherwise. It has a rather unique look due to the combination of a  normal-sized slide with a compact frame.

Of course, maybe that unique look isn’t such a bad thing. It’s become fashionable lately to make a “Glock 17k” by chopping down a stock Glock 17’s grip to Glock 19 length. This makes the gun more concealable while not sacrificing the longer sight radius. BUL also sold an adapter for 18rd magazines that provided a longer grip (ala the A&G Grip Extension for Glocks), if you’d rather sacrifice size for capacity and grip comfort. 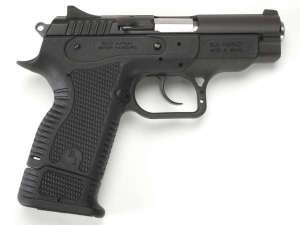 9mm: You can use 9mm BUL M-5 magazines (BRI, All-America Sales, etc.), including Ultra-X magazines, but the LRBHO will not work, as the followers are different between the Impact and the M-5. You can also use modified Para 18.9 mags – just file the top of the magazine catch slot until they fit (the body is a bit tight, too). I am unaware of anyone selling 9mm BUL Impact followers, or if they were even made – the “factory” mag that came with my gun looks like it’s a cut-down M-5 mag and did not have an appropriate follower. Para Hawg 9 magazines do not fit.

.45ACP: There are a lot of factory 10rd DDA 10/45 magazines still in the market, and Triple-K appears to make a copy. If you want higher capacity than 10rds, you can use .45ACP BUL M-5 magazines (BRI, All-America Sales, etc.) or Mec-Gar M-5 mags, but the LRBHO will not work (as above). Ultra-X magazines should also work, albeit they are far rarer and more expensive. Presumably, you could cannibalize the follower from a true BUL Impact mag to fix this problem.The magazine spacer appears to be unavailable, if it was ever produced in the first place. I am trying to hunt up an A&G spacer to see if that could be modified into working, but they seem to have been discontinued.

Speaking of parts compatibility, I tried swapping slides on my BUL Impact and my new-style BUL Cherokee. They physically fit each other, but did not work correctly. It’s possible that maybe the old-style BUL Cherokee slide would fit, but I would not depend on it.

One interesting design choice for the BUL Impact was going with a fixed front sight and an adjustable (but not dovetailed) rear sight. This is cheaper to manufacture, but rules out the usage of after-market night sights. The sights are the usual 3-dot system… the front sight on mine was red. I don’t know if this was a previous owner’s modification, but it did help with getting the sights aligned.

There is no accessory rail, decocker, or any of the other niceties we’ve come to expect on modern SA/DA guns. Controls are exactly like the CZ-75, which is probably a good thing. Field stripping is also similar to the CZ-75, which is definitely a good thing. For whatever reason, my gun refused to lock back on any magazines – converted Paras, BUL M-5 mags, and even the factory BUL Impact magazine. This is annoying, but not game-breaking No issues feeding were encountered.

The trigger was surprisingly good in single-action mode (felt like 4.5lbs), and was even pretty reasonable in double-action mode. And, much to my surprise, this gun performed on the range. It was very accurate, probably due to the slide inside frame design and the long sight radius, and the short grip forced me to get a good hold on the pistol. I honestly had not anticipated liking the gun this much.

If appropriate grip extension adapters and compact magazines were available, I’d be enthusiastic about the Impact, especially in its compact slide form. I like the concept of a compact frame pistol that can be made full-frame on demand, and another way to use BUL M-5 magazines is pretty cool. There’s even holsters out there for it!

But, without those grip extension adapters and easily available compact magazines, it’s more of a curiosity in 9mm than a serious carry option. Perhaps BUL will come through and provide appropriate baseplates and magazines now that they have a US distributor – and if they do, it’ll be the gun it should be once again.

22 thoughts on “The BUL Impact”