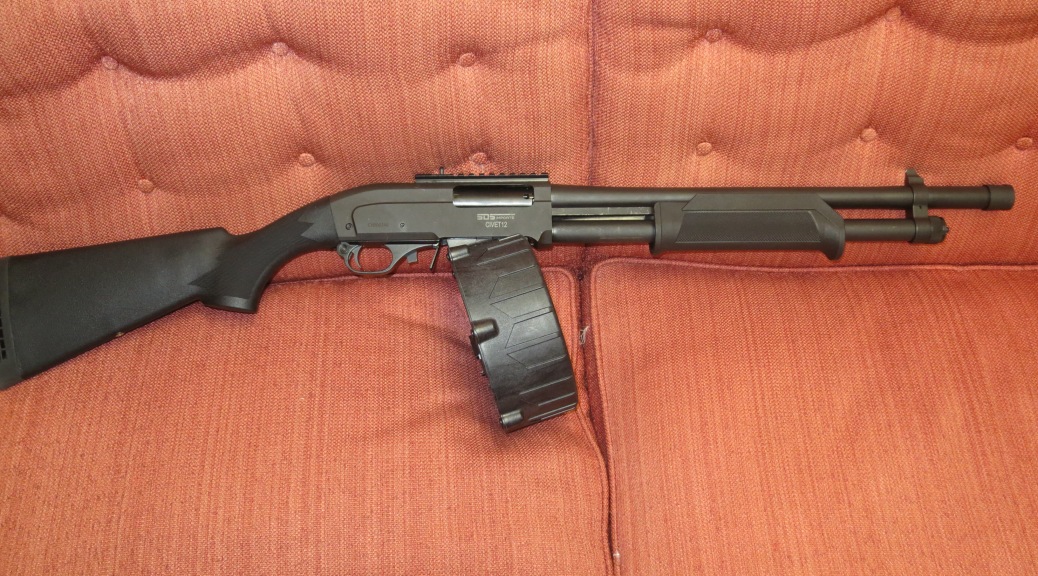 SDS Imports recently started bringing in the “Civet 12” shotgun, which is a modified Hawk 982 that takes Saiga 12 mags. Because I am an absolute sucker for guns that share mags with guns I already have, I picked one up. It cost me about $225. I tore it apart, and compared it to my “old Remington” 870. Haven’t had time to haul it to the range yet (UPDATE: see the end of the post), but I’ve got some preliminary thoughts to share.

The Civet 12 is loosely based off the Hawk 982, and even has Hawk branding on it. SDS Imports tells me it’ll take 870 furniture – I couldn’t get the handguard nut off, but my tool for doing that kind of sucked, so I’ll report back after I try a new one. The rail holes appear to be the same spacing as the standard 870. It is otherwise parts incompatible with the 870, except for maybe some bits of the FCG – the entire receiver is wider and longer (to accommodate the Saiga 12 magwell), and the bolt and action bars are also different. I am not sure whether the 982 adapter sleeve would work to put in an 870 barrel, based on my desultory attempts to put the 870 barrel on it, but not sure why you’d want to? The barrel is threaded for Saiga 12 muzzle devices. I might pull the flash hider off my Saiga 12 and put it on this (and then get a decent comp for the Saiga 12).

Fit and finish is comparable to a modern 870, but let’s be real, it’s a $225 pump gun that takes Saiga 12 mags… as long as the thing keeps working, who cares how it looks? The stock has way too much length of pull for a tactical shotgun. The handguard is not quite as bad, but nothing to write home about – you’d think these guys would have at least slapped on a pic-rail for a light, but nothing to be had. The ghost ring sights are simple, but usable – no ability to change elevation that I could see. They are still better than a bead. The receiver itself is kinda cool-looking and appears to be CNC cut from billet, but is a touch chunky. One particularly weird bit was how long the action release button is; I complain frequently that the 870’s release button could use a touch more length, but this one is just crazy long.

I slapped in the factory mag, an AGP Arms 8rd mag, and an MD-20 drum. All of them seemed to insert and cycle fine with dummy rounds. You cannot insert a full mag on a closed action, or at least it was brutally hard when I tried to. You need to have it open. This is not a big deal – I think most people would love to load their Saiga 12s on an open action – but it is a training issue.

The factory mag has a follower that seems a little higher than the others; more on that in a bit. Fit is pretty tight, even with the action open – this isn’t like an AK where you don’t need a lot of force to insert. You need to be fairly aggressive. Maybe a few evolutions of that will make them go in more smoothly. Fixing the LOP with a Magpul 870 stock may also help (although some may balk at putting a $100 stock on a $225 gun… suck it up and make it work).

For fun, I tried doing a traditional “fire one, reload one” by tossing a mag in the ejector port with an empty mag in the gun. This didn’t work well with the AGP Arms magazine – the shell hit below the barrel’s chamber. On the factory magazine, the slightly higher angle of the follower would let you do it, provided you put the new shell near the back (so that it was resting on the follower itself). I don’t think this is a viable method for doing reloads – it uses detachable mags, you should just reload using those. My suspicion is that if the shotgun had a more substantial feed ramp, you might be able to pull something off like this.

As I’ve mentioned before, mag-fed shotguns have some logistical problems when it comes to home defense usage in an emergency. But if you have a minute to get yourself together, they have some advantages over a tube-fed gun. One thing I will say for the Civet 12 (and the 870DM, and the 590M) is that cycling the action with a pump GREATLY reduces the reliability issues you see with semi-auto detachable-mag shotguns. This is because you can just power through stripping the new shell from the magazine, rather than rely on the energy from the fired shot (which, if it was birdshot or less-lethal, might not be all that much).

To sum it all up, I like this shotgun a lot, and if you have a Saiga 12 already, it’s a nice little add-on to throw into the safe. It’s not a perfect gun, but you’re getting quite a lot for your buck. There is also a version that takes MKA1919 magazines, which is kind of cool if you’re into that platform.

UPDATE 7/15/2019: I took it out to the range to zero it with some slugs. No problems at all with feed or function using the factory 5rd’er or the AGP Arms 8rd mag. Elevation was right on for a decent 15yd zero. Recoil was as brutal as expected with the factory stock; this thing really needs a Magpul SGA for better stance and padding.