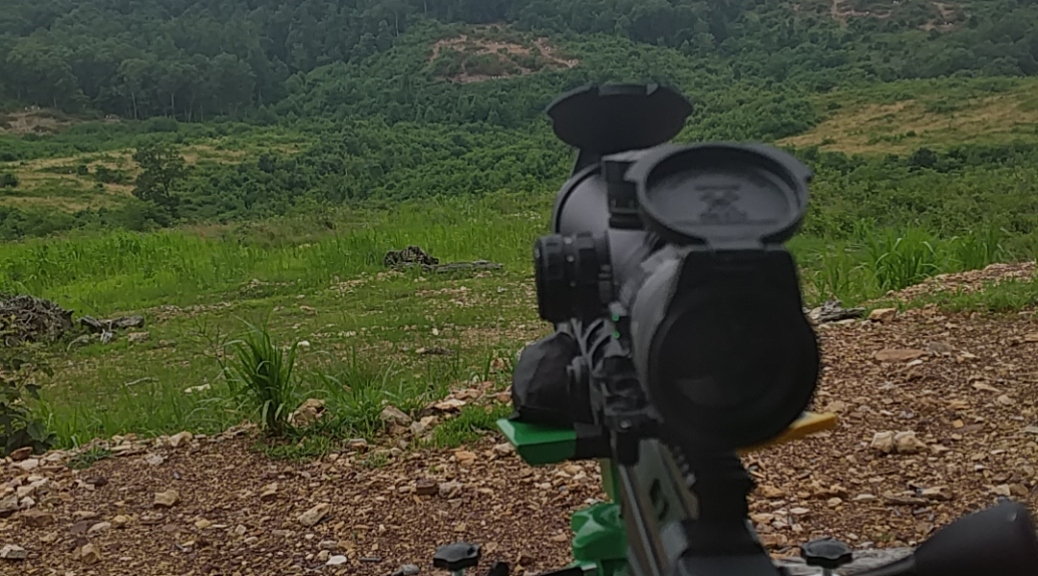 I managed to break my streak of taking a class once a month last month; between a family vacation and Jewish holidays, I just could not find a good Sunday to do it. This concerns me a bit, because I think you should always be learning new things and improving, and training is a vital component of that. To make up for it, I’m doubling up in July.

I just finished my first July class, which was Peacemaker National Training Center’s “Intro to Long Range Presented by Zeiss” class. I’d love to share my experiences shooting out to a thousand yards for the first time!

Peacemaker National Training Center (PNTC) is a shooting facility in the Virginia / West Virginia border area that has, to my knowledge, the longest distance rifle range in the DC area (for slightly liberal values of “DC area”). They’ve got three rifle ranges, two of which extend out to a thousand yards (the one we shot at went to 1200), trap ranges, and a rather impressive handgun range setup that has action shooting bays. Everything there seems to be sponsored by an optics or rifle manufacturer. This is as cool as it sounds, which makes it a prime destination for competition shooting.

This leads me to a slightly embarrassing revelation: before this class, I had never shot past 100yds, ever. People in more rural areas might wonder how this came to be, but if you’ve ever lived in an urban area, you know there’s simply no room for such sprawling ranges; they either sell out to developers or get shut down by the county and THEN sold to developers. Traveling out for an hour and a half each way regularly is just not something I can do with a young family – at least until I can convince my kids to come to the range with me!

As I mentioned in an earlier blog post, one of my big goals for the year was to correct this deficiency and do some long-range shooting, and maybe even gain a bit of mastery. PNTC had the closest long-distance class that was on a Sunday, so I signed up for it. Six months later, it was time to head out there!

PNTC is about an hour and a half from my house in MD, assuming there’s no traffic (which is a fair assumption on a weekend). Google Maps guided me to it very smoothly, despite its remote location. I wound up at the PNTC HQ building, which is basically a somewhat small gun store and snack market. 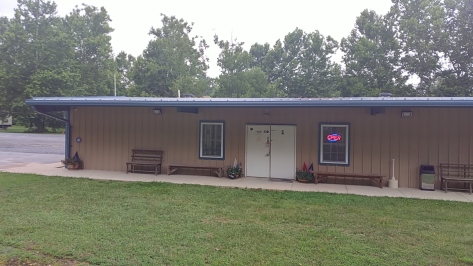 The class syllabus from the website was as follows:

In this course we’ll begin in the classroom and move immediately to the 300, 600, 800 yard lines. You’ll learn the fundamental highlights of Long Range including Drop/Wind Compensation, External Ballistics and Long Range Marksmanship techniques.

In this course we move deeper into what it takes to make “precision shots” at long range. We look at the entire rifle system, take a deeper look at ammunition quality, projectile data, data charts, optics and field shooting. On the range you’ll start at 600 yards and shoot in field positions out to 850 yards engaging targets 6 – 18 inches in diameter.

This is both exciting and unnerving.  Like, it’s cool that we’ll be shooting out to 800, but that’s eight times farther than I’ve ever shot before! I don’t want to say that I had performance anxiety per se, but I was allocating a big chunk of my personal time to the class, and I didn’t want to get less from the experience than I could.

Gear-wise, I brought a Ruger Precision Rifle in .308 with a Sig Tango6 5-30x scope (MRAD milling reticle) with a Magpul bipod. My ammo was Federal Gold Medal Match 168gr. I also had my Kestrel 5700 and a Bushnell CONX one mile laser range finder This was not a bad setup at all, but I actually hit its limits by the end of class.

Suggested round count was 60-80. I went through about 100. I recommend bringing 100-120, simply because you’ll get more out of the shooting portion of the class if you can send more rounds down range.

The class meets up inside the HQ building. There’s some roll-call, and then when that’s finished, we meet up in the classroom. The classroom is a large trailer behind HQ. It has power and air conditioning, and was surprisingly comfortable. 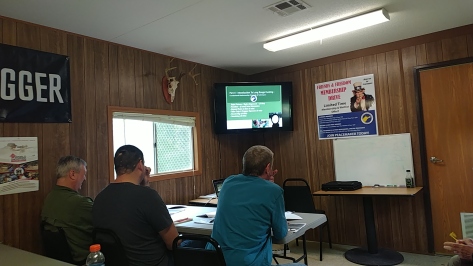 Inside the classroom, there’s a round of introductions, including shooting experience and what we hoped to get from the class. I would say most of the (diverse, but all male) students were in roughly the same position as me. They wanted to give this long-range thing a try, but hadn’t done it before. That made me feel a little better.

Before the class kicked off in earnest, we had a rather stunning surprise: Austin Wilcox, the product manager from Kestrel Instruments was there, and he wanted some beta testers for the soon-to-be-released Kestrel 2700. Since we were new long-range shooters, we were the target audience for that product… and anyone who agreed to do a couple surveys and give some feedback would receive a free Kestrel 2700. This brought the cost of the class down to about $50 for me. Don’t expect that kind of awesome surprise next time, but sometimes you’re just in the right place at the right time. I’ll give some impressions on it in a future blog post, but suffice it to say, it seems like a tremendous value for the money ($180). 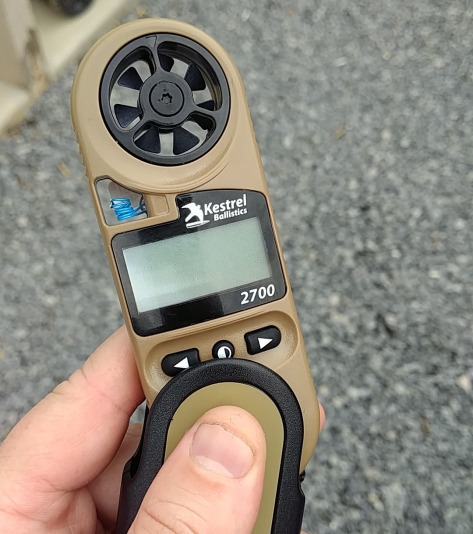 The class was taught by Wade Shambaugh. Wade is a LEO sniper and long-range competition shooter, and seemed to be a real SME. He was assisted by another long-range competition shooter who’s name I didn’t quite catch (Forrest?); he designs the stages for PNTC’s distance rifle matches, and seemed like a hard-core competitor (which is a good thing in my book!). There were also a couple other AIs/RSOs who also added some useful information and did a bang-up job spotting and diagnosing issues during the shooting portion of class. All in all, a very capable instructor cadre, and that’s no small praise.

I would say there were not a lot of surprises during the classroom time, but I was also somewhat familiar with the topic (even if I didn’t have any execution time in it). I did appreciate that the instructors were able to get down into technical specifics if requested (I was curious as to acceptable velocity spreads for PRS), and had some real-world experience comments about holding vs dialing for wind and how to shoot supported (don’t use bipods if you have bags!).

One thing that does stick with me is the comment that 90% of taking a successful long-distance shot is the preparation for the shot. I discovered this was very true; if you’ve got your gear and dope squared away, getting the rifle into position on the bench and pressing the trigger is the easy part. 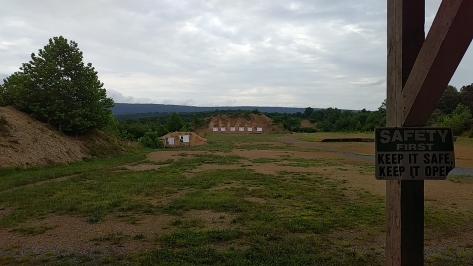 After the class, we moved out to the hundred yard range. Besides being scenic, it was already pre-staged with targets for everyone to confirm and refine their zeros on. As someone who’s been to carbine classes where zero confirmation was kind of an ordeal at 25yds, I was mildly pleased with how smoothly it went at a hundred yards. I had screwed up my zero stop (figures!) and needed to do a little hex wrenching. When I was done, though, I had a very solid zero that would take me through the rest of the class with minimal drama.

The next stop was “the mountain range”, which I believe is the “Frontier” range in PNTC parlance. It was about a ten minute drive from the PNTC HQ. You go on a main road, then you go on a gravel road, then it turns to semi-gravel, and then you’re wondering how your sedan is going to make it up what barely qualifies as a dirt road at a steep gradient. I made it, but there were a couple moments where I was less than certain I was going to do so. (Others told me they had much the same concerns; a little road improvement may be in order, if it’s even possible.)

However, at the end of that slightly-scary drive, you get the most amazing view a shooter can see. It’s just a valley full of steel targets at varying distances. It is beautiful, magnificent, and even a little intimidating. 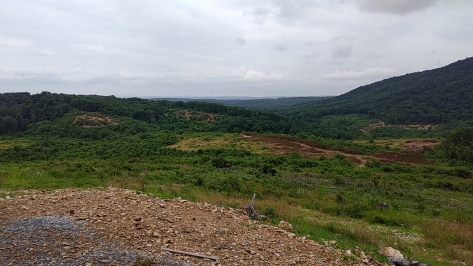 We set up our rifles, dialed the ranges into our new Kestrel 2700s, dialed our scopes with the dope from the Kestrels, and then got shooting. Half the class shot, while the other half spotted. The “Presented by Zeiss” part of the class really kicked in here; we got access to Zeiss spotting scopes and range-finding binoculars, all of which were very high quality and did an outstanding job on demand.

I chose the 560 yard target as my first “real” one of the class, and borrowed some Caldwell bags from the instructors to give myself some more stability (vs going with a bipod). The Sig Tango6 showed the target very clearly, and I sent my first round… just a touch high. I dialed back a tenth of a mil, and shot again. My spotter called it: “hit!”, followed by that ever-so-delightful ping of a bullet on steel. It was shocking how easy it was. The Ruger Precision Rifle had very little recoil due to its weight and muzzle brake.

I moved to a farther target.  My Bushnell CONX failed me; it wasn’t ranging anything past about 400 yards. To be fair, this was with a bright sun high in the lightly-clouded sky, with a lot of humidity in the air, so not ideal conditions for a LRF. The Zeiss binoculars did work, though, so I moved on to 630 yards, and then 720 yards. The Kestrel 2700’s calculations were dead on, sans requiring a touch of windage adjustment for spin drift; I verified it with my Kestrel 5700, and it was within a couple mils on elevation. 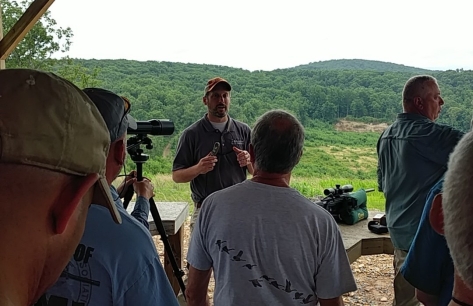 Then I went to 1040 yards, and things broke down a bit. I was completely unaware (until I Googled it after class) that Sierra 168gr MatchKing bullets – the ones in my ammo – don’t do very well when they go transonic, and my Federal Gold Medal Match ammo went transonic a bit before a thousand yards. I still managed a couple hits, but it was clear there was an increasingly random component to their flight path. If I had been using 175gr FGMM, or maybe even my 6.5 Grendel rifle, I think I would have had more success.

By the end of the live fire, I had figured out how to spot my own impacts, and didn’t even need the spotter. This meant I could essentially work the rifle on my own, which greatly increased my time available to shoot. It didn’t hurt that some people left a little early, freeing up bench space.

After we spent a few hours shooting, we returned back to the HQ for a wrap-up and certificates.

I really liked this class a lot. I thought the syllabus made sense, the instruction was excellent, and it was very much a guided learning experience when we got to the real shooting bits. The class equipment was top-notch, and it felt like you got more than just an “introduction” to long range shooting when you had instruction on Kestrel usage. And, to be honest, banging steel at 400-1200 yards with precision rifles is just a lot of fun.

I highly recommend this course. I’m looking forward to trying out the advanced course in the future, perhaps with a few more long-distance range sessions under my belt.