I’ve moved on from the supplier showcase to the main expo hall. It’s very difficult to communicate just how huge SHOT is – it dwarfs pretty much everything I’ve ever been to.

My first stop was Tactical Solutions (perhaps better known as “TacSol”). TacSol had a big pre-SHOT release, which was the .22lr “Ohwyhee” rifle. In that no-bullshit manner that always endears me to vendors, I asked why it exists when I can just buy a 10/22 from them. What does being bolt action get me? He smiled, and handed me the rifle.

Folks, this thing is damned lightweight, even compared to my 3D printed receiver 10/22, and the build quality is just stellar. It is also the only takedown bolt action 22lr out there. I’m not going to claim this is a rifle everyone needs, because it’s not, and definitely not at $1000 MSRP, but I can definitely see a market for people who want a high-quality 22lr bolt action without incurring the weight hit and portability hit of other platforms.

We also did a brief walkthrough of their integrally suppressed 22s. They’re not new,  but I’ve never handled one in the flesh, so that was interesting.

While swinging by the Samson Manufacturing booth, something caught my eye.

Yes, that’s a new-manufacture Ruger Mini-14 folding stock, along with a 10/22 version. They are working with Ruger on it, including the manufacturing. I think it will be VERY appealing to people who want that AC-556 look, but don’t want that “rare factory stock” price.

My next stop was YHM. YHM recently announced the new Nitro N20 suppressor, which reminds me of a less beefy Omega 36M. I think they might have a winner with this one, because in short config with direct thread, it’s only 6.5oz. They also alluded that it could take other QD mount systems, which I assume means Omega threads. If you’re like me and in the market for a K-can, this one is worth a look. 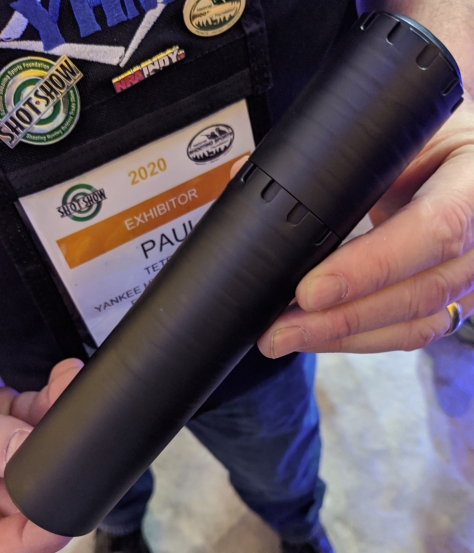 While moving to my next destination, I ran into the Serbu Firearms booth, and Serbu actual himself, Mark Serbu. They had a Liberator 12K on display, which, as a 3D printing guy, greatly interested me. It’s very much a scaled up Imura, with a clever sear system. Super illegal in my home state due to the cylinder mag, alas. We also bemoaned the demise of the SU-15 upper… rest in peace. 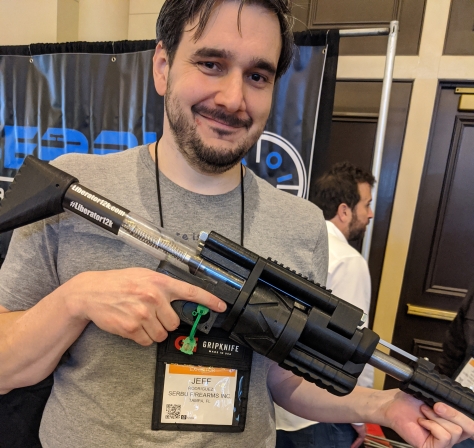 I was very pleased to meet up with FAB Defense after that. Even though I don’t do all-Israeli stuff anymore, I’m more than happy to meet up with them. FAB had quite a bit of stuff on display, but wanted to emphasize their “precision bundle” of a stock, rubberized pistol grip, and polymer/metal bipod. 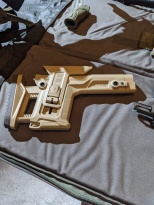 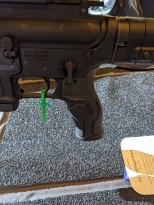 What I handled seemed solid, and could be a good value depending on pricing. They also definitely deserve some credit for finally releasing a pistol grip without those obnoxious finger grooves on them. I also snapped a couple pictures of their pistol chassis systems.

While seeing if Radical had anything I cared about (didn’t seem that way), I did take a couple pictures of Suppressed Weapon Systems guns. I didn’t have a chance to talk with them, unfortunately. I might double back and see if there’s something I’m missing. 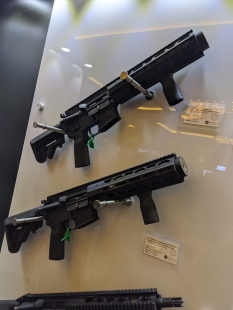 Kel-Tec was very helpful to me, and was kind enough to 1) listen to me complain about the lack of a factory MLOK handguard on the PLR-16/SU-16 and 2) show off the new Sub-2k CQB, which is integrally suppressed. The S2K CQB is a VERY interesting gun. In many ways, it is really a gen 3 Sub-2k. The integrally suppressed barrel ROTATES. The reviews I saw seemed to completely miss this, and it is probably the best feature of the gun. You can now fold the gun WITHOUT removing your optics or irons. I still don’t like the charging handle location, but it almost feels like I can live with the gun now, and that is a major accomplishment for K-T. An FFL who wandered by commented that they sold their allotment immediately, so the guns are in the wild now if you’re into that. The decibel number I heard was 133db, which is more than acceptable. 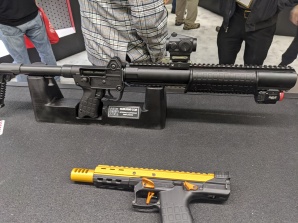 I stopped by Wolf Ammo for a brief chat. They are cool, friendly guys! I know it is uncool to love steel-cased ammo in some circles, but they’ve enabled me to stretch my budget to do more shooting, and that’s a virtue in my book.

The big release of the year is the steel-cased .300 AAC ammo. Supersonic 145gr to start, and subsonic near the end of the year. You should also see copper jacket (vs bimetal) .223, .308, and 7.62×39 filter in over the next few months. They mentioned the possibility of 9mm, but didn’t feel it would be economical. I also bent their ear about getting more subsonic 7.62×39 into the country.

My final stop before lunch was at Next Level Training, who makes the SIRT pistol. I do a LOT of dry-firing with my SIRT pistol, so I was eager to engage with them. They have an exciting product coming out in Q2 of this year (hopefully) that will let you plug a SIRT pistol into an AR-style chassis.

This is pretty great if you want to do rifle dry-fire drills without the concern of using a rifle. I encouraged them to develop a weighted mag for it similar to the existing SIRT mags.