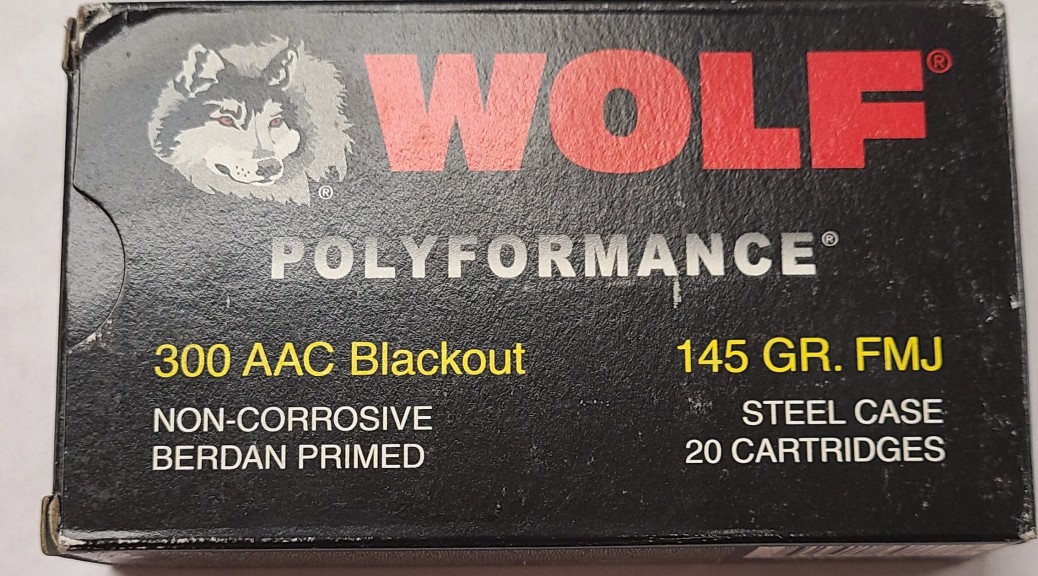 My friends at the TargetBarn company – an online ammo and targets retailer – apparently thought that my previous review of Federal Syntech 130gr “PCC” 9mm ammo was not the worst thing in the world that they had ever read, and offered to sponsor another ammo review. We went back and forth for a bit, because it’s the ammo crisis, and I also didn’t really know what anyone would find interesting. Boring reviews don’t help them, and they don’t help you.

Poking around, I noted that they had some of the 145gr Wolf .300 AAC Blackout ammo. Despite my previous assertions that .300 AAC Blackout is a caliber with no real mission, I had built out a cheap-ish upper anyways because Wolf had (or would have) cheap steel-cased ammo, and I’m a sucker for such things. They agreed to provide some for review. Well, smash-cut to September 2021, and that cheap ammo is not looking so likely anymore. Now we have a different question: should you stock up on a bunch of this before it’s gone?

END_OF_DOCUMENT_TOKEN_TO_BE_REPLACED

I’ve moved on from the supplier showcase to the main expo hall. It’s very difficult to communicate just how huge SHOT is – it dwarfs pretty much everything I’ve ever been to.

END_OF_DOCUMENT_TOKEN_TO_BE_REPLACED

Every time I see someone ask about non-5.56 calibers on the AR-15 platform, there’s a legion of fanboys who start proclaiming that .300 AAC (aka, .300 BLK or Blackout or whatever) is the way to go. Let’s take a look at its capabilities:

END_OF_DOCUMENT_TOKEN_TO_BE_REPLACED

Sorry for my absence – my interests lately have run to 3D printing (yes, including firearms!), which is a bit off the topic of this blog. I also have not had much time to go shooting with the kids’ school year picking up. Rest assured that I still plan on posting, perhaps with less frequency.

As shown on Facebook (h/t to the TheFirearmBlog for reminding me to post), Recover Tactical is developing Browning High Power grips. Presumably, these will fit guns with curved trigger guards like true BHPs, Kareen Mk1s, and FEGs, but probably not the guns with square trigger guards like the Kareen MkII/III, KA-III, and the Arcus guns. Next in line are apparently Makarov grips, which strikes me as a bit nonsensical – FAB Defense has a good solution already, and how much of a market is there? IMHO, there’s a huge opportunity in producing TA-90 and CZ-75 grips, given how many beat-up old guns are on the surplus market now.

Unfortunately, there’s some bad news coming along with this. The conversion kits are going to be pricey since they include a barrel, bolt, gas regulator, rail with gas regulator cut-out, new recoil springs, and a new case deflector. Much like the 9mm conversion, this is a bit of a situation where buying a new gun seems rather cheaper than converting your old gun. (Or, perhaps, converting your AR-15 instead of your Tavor.)

Finally, the CAA Micro RONI has been released, and, shockingly, it’s really rather reasonably priced at $250 for the base model. Jim Grant has a review, and he seems to like it – with the usual caveat of “your Glock isn’t a rifle even in a chassis”.