Just to be clear: all images in this post are from Modern Gun magazine, August1994. I use them without permission, and will remove the images if requested by the rightful copyright holder. 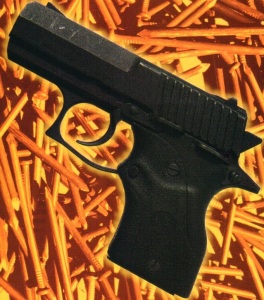 There are many mysterious Israeli handguns out there, but besides the semi-infamous 9mm IMI revolver, another difficult one to track down is the “Black Horse”. There’s a grand total of one reference to it online, and a somewhat grainy picture that seems to have been taken from a visit to the IDF History Museum in Tel Aviv. (My need for a trip to Israel grows and grows…)

But, thanks to a tip from a helpful commenter, Daniel Watters at TheGunZone, I’ve finally hunted up some more information on the gun, and it’s not what I was expecting…

So, first, the source. I was told that the cover of Modern Gun magazine (August, 1994) bore a striking resemblance to the Black Horse. This seemed true, and I was intrigued by how the cover didn’t name the gun in question. I hunted down a copy of the magazine on eBay and bought it to investigate further. 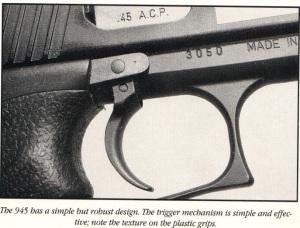 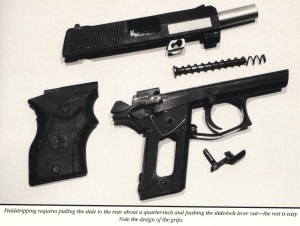 Much to my surprise, the gun was not covered as a Sirkis design, but rather as the “IMI 945 Compact” in .45ACP, originally produced in 1992. There was a picture of it field-stripped, and it was a rather unique design. The general design stylings resemble an Officer-sized 1911, including the slide riding outside the frame, but the internals were closer to what you’d see from a CZ-75/Tanfoglio/Jericho (linkless barrel, no grip safety, double action). It also has that trademark Sirkis indentation at the back of the grip and his bowed-squared trigger guard, which I think lends significant credence to the theory that Sirkis was the original designer. Plus, it has a loaded chamber indicator at the back – shades of the Sirkis SD9! 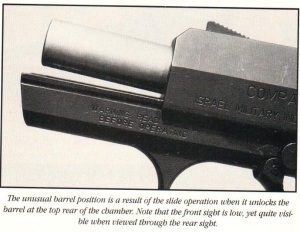 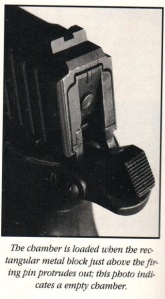 The 945 Compact took standard compact 1911 magazines, which was a pretty clever decision for a gun made in the early 90’s.  In a way, you could think of the 945 Compact / Black Horse as a sort of all-steel predecessor to the BUL Impact, albeit I doubt they share much design DNA. 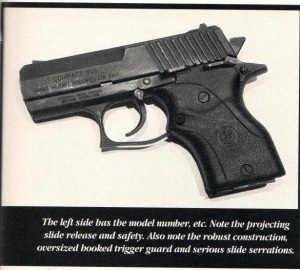 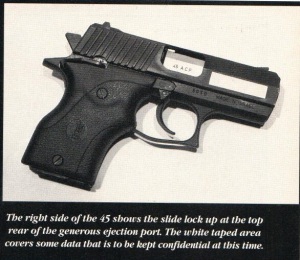 Alas, due to being all-steel, it was also rather heavy for a compact gun. IMI promised that the production version would be lighter, but, unfortunately, there’s no evidence at all that this gun made it to production. It was supposedly a very nice shooter, so that’s certainly a disappointment.

Now that we know about the 945 Compact, was there a full-size version coming out? The information I have on the 945 “full-size” shows it as a typical double-stack 1911 with what appears to be a polymer frame.  My pet theory is that IMI was going to source the frames from BUL and use the 1911 slides and barrels that they were already making. I guess it’s possible that they were planning on using the same operating system as 945 Compact, but the presence of a grip safety makes me skeptical.

One other fascinating thing about the 945 full-size was the “multi-caliber” advertising – they wanted it be able to run 9mm, .40S&W, .45 ACP, and .357 Sig. If they had figured out a mechanism to be able to swap caliber with simple top end and magazine swaps, that would have been a pretty good marketing angle for a 1911-style gun.

Leave a Reply to Jew with a Gun Cancel reply