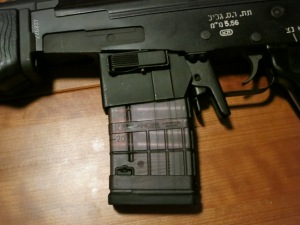 One of the big advantages of the upcoming Galil ACE line from IWI is the ability to take standard magazines. While I have no particular problem with Galil mags, they’re pretty much proprietary to the Galil (well, and the SiGalil). Being able to use AK, AR-15, and SR-25 (“DPMS-style”) magazines is a big step forward for the Galil platform.

One lesser-known feature of the Galil, though, is that with some work and an adapter, you can get it running AR-15 magazines.

There were a fair number of AR-15 magazine adapters made for the Galil. Let’s talk about them: 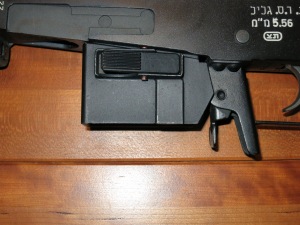 I have an unmarked adapter. It required a lot of fitting (not done by me) on a Galil with CNCWarrior receiver, so I’m guessing it’s a Blackthorne. If you have experience fitting AK magazines by filing lugs, you pretty much know what you’re in for. Some quality time with a file and dremel grinding wheel will get you there.

A more scary modification that you need to make is possibly modifying the front trunnion to allow full insertion of the AR magazine. On my gun, at least, the magazine hits the front trunnion and stops a tiny bit short of locking in.

That’s also easily solved with a dremel and a file, but the front trunnion is such an integral part of the rifle that you need to be damned sure you’re only taking off exactly what you need. This is not quite as big a deal on a Galil or milled AK due to the front trunnion being part of the receiver – you’ve got a lot more material to work with – but doing a little and then testing is the way to go here. You can always find another adapter, but mistakes with a Galil receiver can be very expensive. I farmed this out to a proper gunsmith for peace of mind.

Once all that’s done, you may still need to adjust the lugs for the feed angle on the gun. Thankfully, my setup was in pretty good shape and didn’t require anything like that.

In terms of magazine compatibility, the adapter I had could take pretty much anything (aluminum mags fit best, pmags were fine, Lancers were surprisingly tight). Nothing was going to drop free, but you need to use your support hand to actuate the magazine release, so you can rip them right out at the same time – call it “manual positive extraction”. The Galil has no bolt hold open mechanism, so there’s no additional manual of arms involved beyond remembering not to try to use the native magazine release.

Speaking of which, I can’t drop my magazine adapter using the Galil’s native mag release unless there’s no magazine in the adapter. I don’t know if that’s how all the adapters work, but it seems good to me.

Now, from a practical value standpoint, I don’t think these conversions are a necessity, or even all that worthwhile. $100-$150 for an adapter and the fitting work will buy you 5-7 real-deal Galil magazines, which is all you really need. But if you like the idea of being able to reuse your AR mags in an emergency, or even just tossing your Galil in the trunk as a “freebie” when taking your AR-15 out to the range… those seem like reasons to investigate this option.