I have never been a particularly good shot. By that, I mean that I know my flaws. I know that I tend to get pumped up and lose fundamentals. I enjoy shooting; it gives me an adrenaline rush. But, in the end, fundamentals are everything when it comes to accuracy.

My research online indicates that the top pistol-shooting competitors out there supplement their range time with dry-fire practice. Sensible enough, but I like immediate feedback. Practicing badly doesn’t get me any better! Laser training cartridges have become more popular for this purpose. After reading some mixed reviews of the longevity of the LaserLyte 9mm training cartridge, I opted for the well-reviewed – and Israeli-made – Laser Ammo SureStrike 9mm Cartridge.

The LA SS 9mm Cartridge (henceforth to be called “the Cartridge”) came in a small clamshell with some well-written instructions and three small reflective laser targets. These targets are just glossy pieces of paper that reflect a bit more than normal paper when you hit them with a laser. They’re like 1.5″ square, so they are relatively small targets. The Cartridge is a two-part stainless steel tube with a rubber primer-esque bit on one end, and a laser lens on the other. Batteries are installed by twisting the Cartridge open and putting them in – very easy. 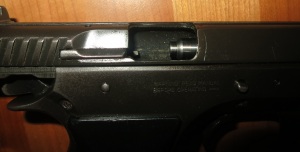 The Cartridge is installed into your gun by locking open your pistol and sliding it in the chamber from the ejection port. I read something online that suggested you weren’t supposed to drop the slide on the Cartridge, but didn’t experience any problems. Perhaps that’s urban legend.

The Cartridge’s laser is fired when your gun’s firing pin strikes the Cartridge’s spring-loaded “primer”. The laser pulses shortly, but with enough time that you can see where it went. When using the included reflective targets, there’s not a lot of doubt when you score a hit or not – the flash is much brighter. Laser Ammo also makes electronic targets that provide more sophisticated feedback, and I’ve read online that these cartridges are compatible with the LaserLyte targets, too.

The Cartridge is modular, and you can swap out various components. The base model is 9mm, so everything builds off that. For example, if I wanted to use the Cartridge as a bore sighter, I could buy a new back cap for that ($40). Or, if I wanted to use it in a 45acp gun, I could buy a new adapter ring ($12). You can even convert to rifle and shotgun cartridges, albeit I’m not as sold on their effectiveness.

The downside to the Cartridge is that it’s not going to cycle your gun, so it’s like you had a fail-to-fire every shot. This makes the Cartridge most appropriate for true-double-action (pull the trigger again!) or hammer-fired guns (pull the hammer back). On a rifle or Glock-style action that doesn’t have restrike capability, you’ll need to pull back the slide/bolt a bit to make the striker reset, which seems like a hassle. I do have a Glock (who doesn’t?), but 99.9% of my handgun shooting is from hammer-fired guns, so this is an acceptable trade-off to me.

Another downside is that you’re using a real gun with the Cartridge. I am not a big fan of waving real guns around in my house – it’s just another step down the path to an ND. Of course, it’s impossible to chamber a round with the Cartridge inside the chamber, so the perception of safety concerns may be more imagined than real.

If you want to take it up a notch, Laser Ammo makes laser conversion kits for airsoft rifles and pistols. I am impressed enough with the Cartridge that I may give this a try down the road, especially since I will probably want an airsoft pistol to train my kids with. However, if you’re a competitor who’s running one pistol nearly all the time, I can see why you’d want to use your real gun.

Lasers are not perfect as training aids – they don’t mimic the flight path of a bullet. So, presumably, you may need to readjust how you aim at certain distances. But I only shoot handguns to about 25yds anyways, so this shouldn’t be too much of a problem in real life.

Removing the Cartridge is a simple as locking open the gun and knocking out the Cartridge with the eraser end of a pencil. I am not really sure what I’d do on a rifle – eraser attached to the end of a cleaning rod? It doesn’t require much force, so I’m not worried about harming the laser optic. 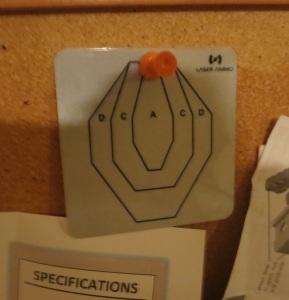 I spent a couple weeks doing 10-15 minutes of dry-fire practice a night with the Cartridge and a variety of 9mm pistols. I was impressed with the way that my fundamentals appeared to improve with the practice. No more blaming the ammo, or blaming the pistol sights for “being off” – it was immediately clear that when I did my job, the pistol did its job. The Cartridge just worked, and as far as I could tell, required no tweaking to line up with the bore(s). I recommend the Laser Ammo SureStrike 9mm Cartridge, and the general concept of laser-aided dry-fire training. Real life may keep me from the range as much as I’d like, but this is a way to make sure my pistol skills don’t totally atrophy in the downtime.