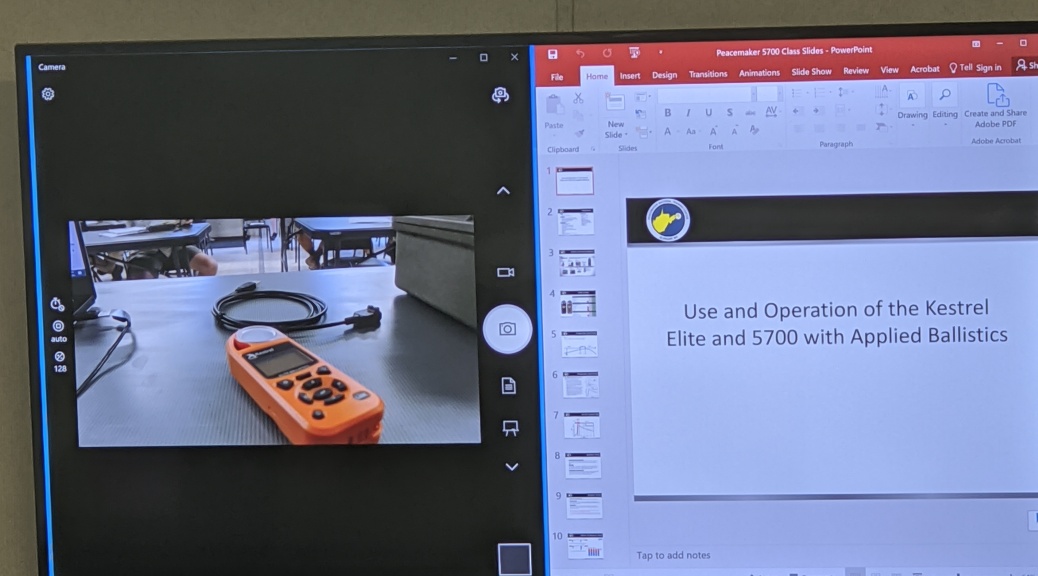 I would estimate that like 95% of the posts I make on this blog are about “action shooting” type things. Carbines, pistols, matches, and so on. Nothing wrong with that; it’s hard for anyone to really do it all if only due to time constraints.

But even if mastery isn’t really going to happen, I do like to branch out into other disciplines if only to attain basic competency. Precision rifle is one of those disciplines, and I got a lot out of the PNTC Intro to Long Range class that I took last year. The Kestrel class that PNTC was offering this past Sunday fit into my schedule, so I decided to see what I could do with that expensive little device.

Class Description: From the website: “The Kestrel Class at Peacemaker is a complete, one day, how to class using the Kestrel 5700 wind & weather meter with ballistics & your rifle!

We’ll cover everything from initial Kestrel setup to ballistics software use & proper calibration. You will spend time in the classroom & on the range with Kestrel experts guiding you every step of the way!”

Round Count: Course description says 100; I only used 70. Given that I was dumping $1.25 down range per trigger pull (sans cost of recovered brass), I don’t mind keeping things down a bit.

Instructors: The lead instructor was Jeremy Kisner. AIs were Wade Shambaugh and Dave McIntyre. All of them seem to be prolific precision competition shooters, and had the skills to teach what they needed to teach. They were a friendly bunch, and I enjoyed my interactions with them.

Location/Date: Peacemaker National Training Center in Glengary, WV, on 8/2/2020. PNTC regularly hosts matches and tournaments, and has one of the longest distance ranges in the area.

Weather: 85-90f, but with low humidity. It was partly cloudy most of the time, and aside from a spot of light rain near the end, it was a perfect day in the mountains.

The wind, however, was gusty basically all day. This made shooting more of a challenge, but it was interesting to wait for the wind to die down before sending a shot… not something you do much on the 100yd range!

Equipment Details: I used my Ruger Precision Rifle (gen3) with Sig Tango6 5-30x MRAD Milling scope. It was more than capable of making shots as far out as I wanted. Clarity on the Tango6 is superb; I started out at about 500yds and left it on 5x zoom because I didn’t actually need anything more. The only other modification on the rifle was an extended mag release.

My ammo, this time around, was 175gr Federal Gold Medal Match. As you may recall, I did not have amazing success with 168gr FGMM at the previous PNTC class I took. At some point, I will start shooting my own reloads for these classes, but I’m still dialing them in to their final state. Just haven’t had the time to go chrono them and shoot them for groups.

For support gear, I had my Kestrel 5700 (non-elite, with weather vane setup), Bushnell 1Mile CONX laser rangefinder (LRF), and a budget tripod for mounting them. My Bushnell LRF performed much better this go-around – it took a couple tries sometimes, but I was able to laze all targets offhand with it. If I was serious about unknown distance shooting, I’d probably elect to get a better LRF, but this served the purpose out past 1000yds.

I used Caldwell Dead Shot bags for rests when I wasn’t using my bipod. Honestly, they’re not great, but they worked well enough.

Preparation Drills: I broke out my rifle a few days beforehand to tweak my zero to 175gr FGMM and get some chrono data. Otherwise, I really do very little work with my bolt guns.

Author’s Previous Experience: Civilian with no military or LEO background. Have shot some competition, but no accomplishments worth bragging about. Training junkie since April 2018, and have averaged a class a month since then. I am OK with a carbine, pretty good with a pistol, and just average with a shotgun.

Class Demographics: A diverse group of 15 men, all running bolt actions of varying sorts. I think I also saw one guy pull out a .224 Valkyrie AR-15. By and large, everyone seemed pretty comfortable with operating on the frontier range at extended distances.

TD1 (morning): Class started with the usual signing of waivers. We migrated into a classroom trailer for most of the day.

I’m going to be honest: I was not thrilled with the lack of social distancing in the classroom. I was wearing an N95 mask, so I wasn’t overly concerned, but I’d probably recommend not having such big classes if they can’t really maintain six foot spacing – especially indoors. The number of cases in WV is pretty minimal, but it’s going up, and I’d prefer not to be another.

Anyways, we kicked it off with a discussion of the rules of firearms safety, and some PNTC-specific rules. No big surprises here.

After that… it was time for the Kestrel presentation! It was clear that Jeremy had extensive experience utilizing most of the functionality of the Kestrel units, in a variety of contexts (including precision rimfire shooting). Certainly, there was a lot of nuance that I was previously unaware of.

This was very much a “classroom class” most of the time. Jeremy had a webcam set up to give you a view of him his Kestrel while he manipulated it, which was tremendously helpful for following along with your own Kestrel. As you can see from the topics above, it’s a pretty huge corpus of information, but the reality is that the basic use of a Kestrel isn’t that hard: set up your gun correctly, get the target direction, and do some environmental capture. Some of the details with environmental capture aren’t necessarily intuitive, but once you know, it’s not too bad.

There were also some helpful tips that came from real-world experience. One of them was being wary of the old-style lanyards, which liked to break and send your Kestrel flying down range. I have one, so I think I’ll be replacing it with paracord soon.

There was a short break every hour and a half (give or take). Most of us used it to hit the bathroom or grab something to eat/drink. This was appreciated, especially for those of us wearing masks.

One slight critique is that I felt like there was too much back-of-the-room cross-chatter at times. The instructors should try to maintain the focus on the lead instructor, and then answer student questions at the appropriate time.

TD1 (afternoon): There wasn’t really a defined lunch break, but we did take a slightly more extended break around noon to wolf down some food. The classroom discussion centered mostly around MV and drop scale factor (DSF) calibration, which were not features I was not so terribly familiar with, but are apparently the killer app for Kestrels.

If you are also not familiar with these ideas, it’s basically like this: MV truing is figuring out the OTHER side of your supersonic drag curve. Your chrono only tells you what it looks like at the front of your gun. To true MV, you pick a target at a distance close to your transonic range. From a stable rest, you then dial in an elevation that gets you hits. If this solution is different than what the Kestrel provided, you program it in. After doing so, the Kestrel will give you much more accurate ballistic solutions.

Truing DSF is similar, except you do it on the other side of the transonic range. If you’ve ever seen a drag curve, you’ll notice that drag completely changes once your bullet goes subsonic. You need to put in some data for that side of the curve as well if you want accurate extreme long range solutions.

After finishing up in class, we moved off to the Frontier Range. The Frontier Range is a ~1050yd unknown distance range. (I mean, there was a cheat sheet, but I lazed all my targets myself this time.) The Frontier Range is basically a valley nestled in some mountains. It involves a somewhat nerve-wracking car ride up to the top of one of them… my Mazda3 was not designed for this sort of semi-offroad adventure, but it somehow made it there. It is, in my o;pinion, one of the best places you can be with a bolt action rifle.

That said, let’s face it: 308 runs out of steam fast past 800yds, especially when you only have a 20″ barrel, and it doesn’t matter so terribly much what round you’re using. There is no doubt in my mind that a caliber like 6.5 Creedmoor would have made shooting at 1000 an easier task.

Caliber envy aside, the instructors provided some Zeiss spotting scopes and LRFs for people to spot and range with. I had enough magnification that I didn’t feel much need for a spotter. I pretty much got myself positioned on bags, sighted in, and started trying to put rounds on target (mostly successfully). I suspect this extreme long range thing takes some time to master, and I didn’t have super-high expectations. I can certainly see how you could just spend a Sunday up there banging steel all day.

I started out with an easy ~450yd target, moved to ~875yds, and then jumped to my old nemesis: the 1040yd target. I wasn’t getting hits every time on it, but I felt like I had much more success than I previously did, with misses being more consistent and easier to explain. Oddly enough, my Kestrel was originally having me dial a bit more elevation than I needed to until I trued the MV; I suspect the higher elevation compared to my zero’ing/chrono’ing range may have been the culprit. But it really did seem to help, so I guess mission accomplished in using that more advanced Kestrel feature.

Class Debrief: None. I did do the brass goblin thing and collected up a fairish amount of spent brass, though.

After Class: Again, not much. Some of the instructors stayed around to bang some steel, and I guess you could have pretty much hauled out whatever at that point to mess around… maybe practice some of those 500-600yd shots using your AR with LPVO, that sort of thing. But you could also do that on Frontier Sunday if you felt like it.

Conclusions: This was a good class, and I really enjoyed it, even if it was a bit more crowded than I would have preferred. If Intro to Long Range was a technique class, this was a tools class. I learned quite a lot about my Kestrel 5700, and it sort of makes me wish I had more places to use it. Perhaps I’ll get into the precision rimfire thing at some point!

The instructors were friendly, competent, and provided useful feedback. I didn’t have a ton of interaction with them during the live-fire portion, but I also knew more-or-less what I was doing. I suspect I will be seeing them in future classes, and I’m looking forward to it.